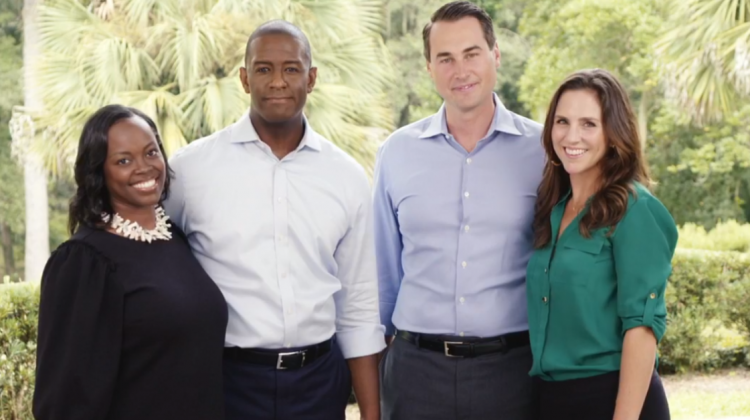 Andrew Gillum, the African-American progressive mayor of Tallahassee who recently became the Democratic nominee in the upcoming Florida gubernatorial race, has chosen a running mate.  His name is Chris King.  He is a thirty-eight-year-old white evangelical Christian who was raised in the Evangelical Presbyterian Church, was active in the Fellowship of Christian Athletes in high school, joined Campus Crusade for Christ at Harvard, and once worked with progressive evangelical Jim Wallis.  He is currently an elder at the non-denominational Summit Church in Orlando.

Over at The New Republic, Mark Pinsky and Loraine O’Connell report on Gillum’s choice of King.  Here is a taste:

Chris King wasn’t the person most Florida liberals expected Andrew Gillum to name as his running mate in the state’s gubernatorial race. A white, evangelical Christian who made a fortune buying up dilapidated Florida apartment complexes after the 2008 crash and refurbishing them as affordable housing, the Winter Park businessman had run against Gillum in the Democratic gubernatorial primary earlier this summer—and lost spectacularly, finishing fifth in the primary, with less than 3 percent of the vote.

His religion might have had something to do with his loss. King has called himself “the case study of whether faith is a deal killer in the modern Democratic Party.” But Florida, like many states, has a highly secular Democratic base that dominates the primaries. With the evangelical community nationally so firmly aligned behind the conservative right, the mere fact that King, who had never run for office before, was an evangelical, and a proud one at that, may have hindered his chances.

Evangelicalism might have held King back in the Democratic primary, but in a statewide general election, his ties to the Christian community could be an asset, and Gillum’s decisions of late suggest he understands that. Gillum himself is Baptist, and in August he spoke to supporters outside the Bethel Church in Richmond Heights, the South Dade neighborhood where he grew up. Apart from than his numerous visits to African American churches and appearances with black preachers, Gillum did not explicitly raise religion, nor, for the most part, did his opponents or interviewers. Still, his choice for lieutenant governor suggests that he will lean into it in his quest to win the governorship.

Since Gillum named him his running mate, King has insisted that “this is not a political marriage—this is not a marriage of convenience.” Regardless, it makes strategic sense. Barack Obama carried Florida with help from the young white evangelicals in the state. They may not be the voters who decide the primaries, but they are an important and often overlooked demographic in general elections within Florida and throughout the South. With King on the ticket, Gillum can craft a campaign message that mixes evangelicalism and left policies—a powerful combination that could provide a path forward for Democrats looking to win back seats in the Sun Belt.