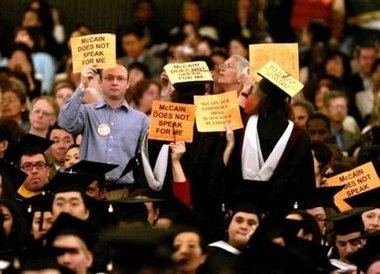 During John McCain’s funeral service, Barack Obama and George W. Bush made veiled attacks on Donald Trump for the current president’s failure to promote civil discourse across political parties.  But University of Pennsylvania historian Jonathan Zimmerman argues that liberals are also to blame for eroding “the civil discourse that McCain held dear.”   Here is a taste of his piece at The Dallas Morning News:

Like body odor and accented speech, however, incivility is a lot easier to notice in the other guy than in yourself. So I hope that those of us at universities will pause for a moment and ask ourselves how we, too, have eroded the civil discourse that McCain held dear.

How many professors have made snarky comments about Republican candidates or causes, instead of engaging our conservative students in respectful dialogue? How many students have denounced anyone they disagree with as racist, thereby cutting off discussion instead of promoting it?

And how many of us have insisted that only certain views — our own, of course — should be aired on campus, and that opposing ones should be discouraged or prohibited?

That’s what happened at the New School in 2006, when nearly 1,000 students and faculty signed a petition urging the school to rescind its invitation to McCain. “Pre-emptive War is Not a New School Value,” declared one sign at a rally outside the school. Other protesters denounced McCain’s position on abortion. “He has been opposed to Roe vs. Wade for more than 20 years,” one professor told the rally. “He is a man who believes in female sexual slavery.”

Got that? We (always “we”) are opposed to the war in Iraq, so we don’t want to hear from anyone who thinks otherwise. And if you’re pro-life, you don’t belong here either. In fact, you’re an advocate of slavery!

And so it goes, right down the line. If you question affirmative action, you’re a bigot; if you oppose gay marriage, you’re a homophobe; and if you resist gender-neutral bathrooms, you’re a transphobe.