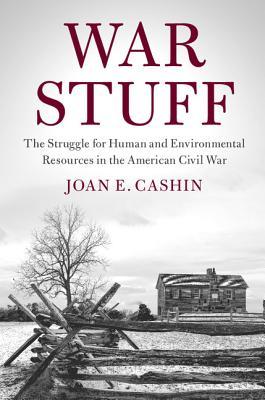 Joan Cashin is Professor of History at The Ohio State University.  This interview is based on her new book War Stuff: The Struggle for Human and Environmental Resources in the American Civil War (Cambridge University Press, 2018).

JF: What led you to write War Stuff?

JC: I wrote War Stuff because I kept coming across references in the archives to the intense struggle over resources between armies and white civilians, regardless of their politics.

JF: In two sentences, what is the argument of War Stuff?

JC: A terrific struggle broke out between armies and white civilians over food, timber, and housing, as well as the skills and knowledge that civilians had to offer.  In this struggle, the civilian population lost.

JF: Why do we need to read War Stuff?

JC: This is the first full environmental history of the War, discussing both armies.

JF:  When and why did you decide to become an American historian?

JC: I fell in love with the subject matter of American history years ago when I was an undergraduate at American University.  To quote a sage, history is an adventure story that happens to be true.

JC: My next project is a material culture history of the Shelby family of Kentucky and Virginia, covering the Revolution through the Civil War.