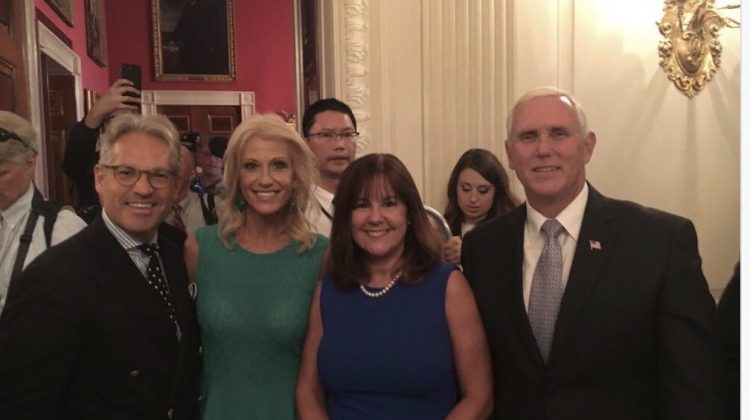 In case you have not heard, Donald Trump is having a big dinner right now for evangelical leaders.  It looks like a court evangelical extravaganza.

Click here to see what court evangelical Robert Jeffress is saying about it at the Christian Broadcasting Network.  Jeffress makes it all sound like a political calculation.  We need Trump and Trump needs us.

(2) More from @robertjeffress : “President Trump is the most pro-life, pro-religious liberty, and pro-conservative judiciary president in history which is why evangelicals continue to support him enthusiastically.” @CBNNews @realDonaldTrump @POTUS @WhiteHouse

Court evangelical Johnnie Moore is there:

So many people are asking me about the dinner tonight Celebrating Evangelical Leadership @WhiteHouse. Over six weeks ago, the President & First Lady issued invitations to about 100 evangelical leaders for a dinner at the White House (1 of 2)

to thank the evangelical community for their invaluable contribution to American life and in particular for their selfless service to communities, nationwide. That is the purpose of dinner. (2 of 2)

Court evangelical Gary Bauer is there:

I am at the White House right now with a 100 faith leaders having dinner with President Trump and the First Lady. We are here encouraging him in the brutal fight he is in against the left. Anything you want me to tell him?

Court evangelical Jack Graham is there:

This evening Deb and I are attending a dinner at the White House with @POTUS and @FLOTUS @mike_pence and members of the cabinet to celebrate the contribution evangelical Christians are making to American life. The influence and voices of believers is massive

Court evangelical Greg Laurie is there:

It is my privilege to be at The White House for a special dinner for a Evangelical leaders. pic.twitter.com/3vzwJsSv9a

It also looks like court evangelical Tony Perkins got an invitation:

Trump finally said something nice about John McCain. I guess he did not want to come across as an unforgiving man with court evangelicals in the room:

Court evangelical Darryl Scott is there:

Back to DC today for meeting regarding Urban Revitalization, then dinner with Potus tonight. Great things are on the horizon.

It wasn’t very hard to learn which evangelicals came to the White House tonight.  Many of them proudly tweeted to their followers and congregation as they relished in the power of the court and solidified their celebrity.

Some of you may be wondering what I mean by the term “court evangelical.”  I wrote a an entire chapter about these Christians in Believe Me: The Evangelical Road to Donald Trump. That chapter builds off of several shorter pieces, including:

The term “court evangelical” has even made it into the Urban Dictionary.

Perhaps the court evangelicals should go back to their hotel rooms tonight and read 2 Samuel 12. (There is a Gideon Bible in the drawer).  Nathan was one of King David’s court prophets.  In other words, he had a “seat at the table.”  When David committed adultery with Bathsheba and then arranged for her husband, Uriah, to be killed on the battlefield to cover up David’s sins, Nathan rebuked his king.  He told David the story of a poor man whose beloved “little ewe lamb” was stolen by a self-centered rich man who had plenty of lambs but wanted the poor man’s only lamb to serve his guests.  When David’s anger “was greatly kindled” against the rich man in the story, Nathan said to the king, “You are the man!”

Will there be a Nathan in the room tonight?  Somehow I doubt it.