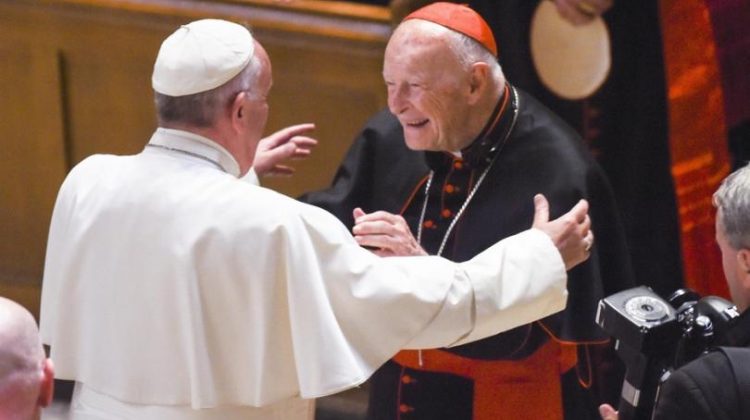 Archbishop Carlo Maria Vigano, a former apostolic nuncio in Washington D.C., claims that Pope Francis knew that former Archbishop Theodore McCarrick was a “sexual predator and not only covered it up, but brought McCarrick into his inner-circle.

Vigano’s 11-page report reads like a television drama.  Read it here.  Vigano also claims that Cardinal Wuerl of Washington D.C. was also involved in the cover-up, although Wuerl denies it. (Wuerl also allegedly covered-up sexual abuse in the Diocese of Pittsburgh).

I am sure this will be all over the news later today, but most of what we know right now is coming from the Catholic press.  Here is a taste of the Edward Pentin’s piece at the National Catholic Register:

In an extraordinary 11-page written testament, a former apostolic nuncio to the United States has accused several senior prelates of complicity in covering up Archbishop Theodore McCarrick’s allegations of sexual abuse, and has claimed that Pope Francis knew about sanctions imposed on then-Cardinal McCarrick by Pope Benedict XVI but chose to repeal them.

Archbishop Carlo Maria Viganò, 77, who served as apostolic nuncio in Washington D.C. from 2011 to 2016, said that in the late 2000s, Benedict had “imposed on Cardinal McCarrick sanctions similar to those now imposed on him by Pope Francis” and that Viganò personally told Pope Francis about those sanctions in 2013.

Archbishop Viganò said in his written statement, simultaneously released to the Register and other media, (see full text below) that Pope Francis “continued to cover” for McCarrick and not only did he “not take into account the sanctions that Pope Benedict had imposed on him” but also made McCarrick “his trusted counselor.”  Viganò said that the former archbishop of Washington advised the Pope to appoint a number of bishops in the United States, including Cardinals Blase Cupich of Chicago and Joseph Tobin of Newark.

Annnnnd in the evening’s *other* news, this document is quite possibly a truly historic bombshell in the life of the Roman Catholic Church. https://t.co/cxY3xNi76g

Written by the former papal nuncio to the U.S., it does exactly what many have called for, and offers testimony concerning who in the hierarchy knew what, and when, about the crimes of Cardinal McCarrick. The testimony implicates a host of high-ranking churchmen. And the pope.

Reporters at @washingtonpost in various cities pursuing details about reports of former Vatican ambassador’s text about McCarrick/Wuerl/Francis/Benedict. Regardless of where this goes, it appears to pull the Catholic Church deeper into crisis, division

This is about far more than McCarrick, and even abuse. It’s about power and the future direction of the Catholic Church. The anti-Francis wing of the church is speaking with new boldness.

Understand what the former nuncio is saying: Pope Francis, though he knew that McCarrick molested seminarians, rehabilitated him, and brought him into his inner circle. If true, Francis is a total fraud on sex abuse.

Regarding the Vigano letter – impt to keep in mind that Vigano and Francis have been political enemies. Recall when Francis visited US and Vigano invited Kim Davis & then Francis replaced him as ambassador to the US. Plus, release is timed bf Francis addresses press in Ireland https://t.co/X1pqvhCbEv

The members of the conservative, anti-Francis wing of the Catholic church are swarming like sharks.  Vigano’s report is filled with speculation and theories that need confirmation.  If what he says is an accurate portrayal of events, this could indeed be a bombshell.  Stay tuned.