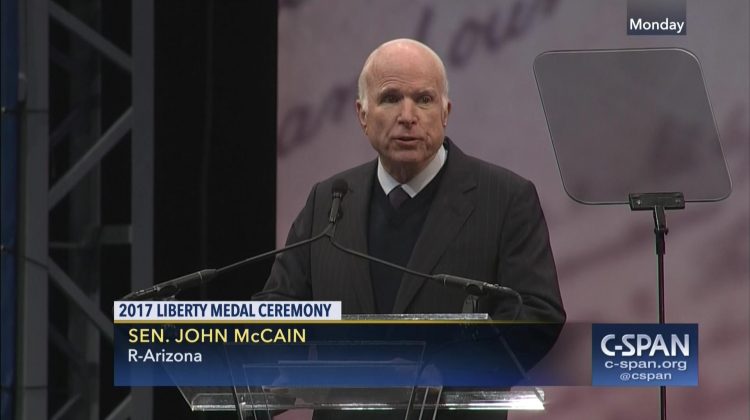 The “Straight Talk Express” was a breath of fresh-air in 2000.  McCain was strongly critical of the Christian Right approach to politics.  He blasted George W. Bush for visiting Bob Jones University before the South Carolina primary.   During the campaign he said, “I am a Reagan Republican who will defeat Al Gore.  Unfortunately, Governor Bush is a Pat Robertson Republican who will lose to Al Gore.”  At one point he called Jerry Falwell and Robertson an “evil influence” on the Republican Party.

In 2008, McCain did a flip-flop on the Christian Right. (I wrote about it here). He knew he needed its support if he was going to defeat Barack Obama.  McCain gave the commencement address at Liberty University on 2006.  He said that the United States Constitution “established the United States of America as a Christian nation.”  (I wrote about this in the introduction to Was America Founded as a Christian Nation?).  He took the endorsement of Christian Zionist John Hagee and then rejected it after Hagee made an anti-Semitic remark.  He started using the phrase “City Upon a Hill.”  And, of course, he chose Sarah Palin as his running mate.

During the 2008 primary season, the sponsors of the “Compassion Forum” at Messiah College invited McCain to come to campus to talk about his faith and its relationship to politics. The event took place several days before the Pennsylvania primary.  CNN covered the event and it was hosted by Jon Meacham and Campbell Brown.  McCain declined the invitation.  Barack Obama and Hillary Clinton accepted the invitation.  I will always be disappointed that McCain did not make this a bipartisan event.  I spent a lot of time that night in the press “spin room” explaining to reporters that McCain was invited, but chose not to attend.  (Later he would attend a similar forum at Rick Warren’s Saddleback Church).

I will remember his “thumbs down” on the GOP attempt to repeal Obamacare.  I still watch this video with amazement and study all the reactions of his fellow Senators

I will remember this and I wonder if we will ever see anything like it again.  When civility and respect for the dignity of political rivals is disregarded, the moral fabric of a democratic society is weakened.  What McCain did at that town hall meeting in 2008 was virtuous.