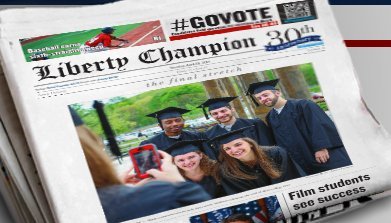 Check out World magazine’s reporting on court evangelical Jerry Falwell Jr.’s control of the student newspaper at Liberty University.  We have blogged about this before, but this is the first extended piece I have seen.

Here is a taste of “Papered Over“:

Two days later, April 18, Falwell addressed the current and incoming Champion staff in a hastily arranged conference call. A dozen students pulled their rolling desk chairs around the news editor’s desk to wait for the phone to ring. Staffers prayed that God would help them be respectful and everything would be resolved soon. Kirk and Huff were also in the room.

Falwell then called and told them the newspaper had been “established to champion the interests of the university, disseminate information about happenings on Liberty’s campus, as well as the positive impacts of Liberty in the community and beyond. And as such, the publisher of the publication, which is the university, is responsible for content decisions, to find stories to be covered by Champion personnel and makes all of the calls on the articles, photographs and other content. … We’re going to have to be stricter in the future if these protocols aren’t followed.”

He asked if there were any questions. The students were silent. Huff said, “I’m looking around the room. … I don’t see anybody with a hand up.” After Falwell hung up, Kirk said, “If you don’t know, I’m Dean Kirk. … In the real world, which this isn’t, let’s just be honest, right? … You will be beholden to an organization, to a company. … That is just part of life. And it’s part of life for all of us by the way. Put journalism aside for a second. Do I get to do everything that I want to do or does Jerry dictate what I get to do? … Somebody else decides what you do and what you don’t say or do.”

Later, Kirk spoke of the story about Red Letter Christians: “I think everybody here is intelligent enough to understand that that story has got some real negative overtones, undertones, potentials. … You have to consider that as a starting point and say, ‘OK, what’s the benefit for this? What’s going to happen that is positive for Liberty?’”