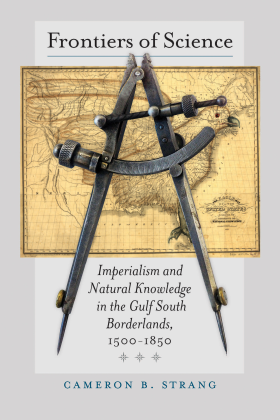 Cameron B. Strang is Assistant Professor of History at the University of Nevada-Reno.  This interview is based on his recently released book Frontiers of Science: Imperialism and Natural Knowledge in the Gulf South Borderlands, 1500-1850 (Omohundro Institute/University of North Carolina Press, 2018).

JF: What led you to write Frontiers of Science?

CS: Serendipity? Or, more precisely, I set out to write a dissertation on how Spanish precedents affected the ways science and expansion overlapped in the early United States. What I found in the archives, though, were a bunch of fascinating stories about how diverse Native, Spanish, French, African, Creole, and Anglo intellectuals throughout the Gulf South produced and shared knowledge. The book developed out of my growing conviction that such stories were neither aberrant nor insignificant but, in fact, were typical of the pursuit of natural knowledge in early America on the whole.

JF: In 2 sentences, what is the argument of Frontiers of Science?

CS: Frontiers of Science argues that encounters inspired by imperialism shaped the production, circulation, and application of natural knowledge among the diverse peoples of America from the 1500s through the 1800s. U.S. expansion ensured that imperialism remained central to American intellectual life well after U.S. independence.

JF: Why do we need to read Frontiers of Science?

CS: Because I believe it ought to change how we think about intellectual and cultural life in the early United States. For a long time now, we have studied intellectual history and the history of science in the early republic with the idea that a post-independence context of liberty and democracy fully recalibrated how American men and women studied nature. But this perspective depends on a very narrow view of America and Americans, one that looks only at the eastern seaboard and free citizens. When we turn instead to the nation’s borderlands and the continental interior—vast and incredibly diverse parts of the nation—it becomes apparent that the pursuit of knowledge in the United States did not cohere around democratic politics or the influence of liberty. It was, as in other empires, divided by multiple loyalties and identities, organized through contested hierarchies of ethnicity and place, and reliant on violence. It is this thoroughly imperial context that, I suggest, ought to frame how we think about the intellectual and cultural history of the early United States.

CS: I was a history major in college, but I didn’t take a single U.S. history course as an undergrad (I was much more interested in imperial China). I went to graduate school at the University of New Hampshire with the idea of doing an MA in museum studies, but I took an early America seminar with W. Jeffrey Bolster during my first semester and I was hooked. I was particularly taken with the history of borderlands and the Atlantic because, well, these fields seemed to have the most surprising stories. After finishing at UNH, I moved to the University of Texas to get a PhD. In short, I have never been all that interested in the big traditional narrative of U.S. history, but what excites me about the field is that there always seem to be unexpected and fascinating stories just waiting to be discovered that have the potential to change how we think about the big picture. Finding and telling those stories is what I love about this job.

CS: I’m writing a history of Native American explorers, particularly Indians from the eastern United States who explored the West in the 1700s and 1800s.