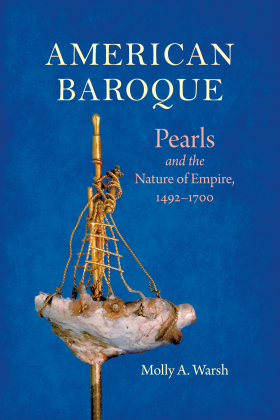 Molly Warsh is Assistant Professor of History at the University of Pittsburgh.  This interview is based on her recent book American Baroque: Pearls and the Nature of Empire, 1492-1700 (Omohundro Institute/University of North Carolina Press, 2018).

JF: What led you to write American Baroque?

MW: I began working on a history of the early modern pearl trade as a graduate student at Johns Hopkins University. The project evolved and grew over the years, but the aspect of the story that hooked me at the beginning—the lived experience of the people who dived for pearls, traded them, and wore them—is what kept me passionate about the book until the very end. It was never a great love of pearls that drove me (although I like them!). Rather, it was a deep curiosity about people and the contours of their lives.

JF: In 2 sentences, what is the argument of American Baroque?

MW: Patterns of pearl cultivation and circulation reveal vernacular practices that shaped emerging imperial ideas about value and wealth in the early modern world. Pearls’ natural diversity and their subjective beauty (the word “baroque” is the English version of the Spanish term barrueca, used by taxation officials in the Caribbean fisheries to describe a misshapen pearl) posed a profound challenge to the imperial impulse to order and control, underscoring the complexity of the early modern world and informing the later use of the word “baroque” as a metaphor for unbounded and irregular expression.

JF: Why do we need to read American Baroque?

MW: Well, I have to say that the book is full of good stories. But beyond that, I would like to think that it offers a valuable perspective on how embedded in global context the Americas were from the very beginning, and also how so many different people, in all walks of life and all over the globe, shaped and were shaped by the evolving parameters of the early modern world. American Baroque is a book about pearls, but it is really a book about people and the fundamental independence of thought and action, even in the most constrained circumstances. Pearls offer a glimpse of people around the globe both caring for and exploiting one another and the natural world and its products. In doing so, they shaped emerging ideas about the nature and value of subjects as well as objects—in short, about the nature of empire.

MW: I wear a lot of hats now—world historian, historian of the Caribbean, historian of the Iberian imperial sphere, but I still consider myself an American historian on a deep level. People raise their eyebrows when say that, but it is true: I am someone who is deeply interested in the history of the Americas in the broadest sense of the term. I first fell in love with American history as a kid growing up on Boston. That love was cemented by wonderful history teachers at my public high school in Cambridge, MA and then by fantastic professors in college at Cornell. It wasn’t until I went back to graduate school at Johns Hopkins, after living in Madrid for several years, that I switched my focus from colonial British North America to the entangled histories of the continent and the world.

MW: I’m calling my new project Servants of the Season: Itinerant Labor and Environmental Flux in Historical Perspective. The title is pretty self-explanatory. In a nutshell, I’m interested in the types of impermanent and semi-permanent arrangements that characterized people’s engagement with the world of work beyond the familiar categories of slavery and freedom. I’m particularly intrigued by how fluctuations in the natural world shaped these types of agreements, either coerced or voluntary. The project is still in its early stages, but I think I’m going to take a very broad approach to this new book and consider historical phenomena from circa 1500 to the present day.