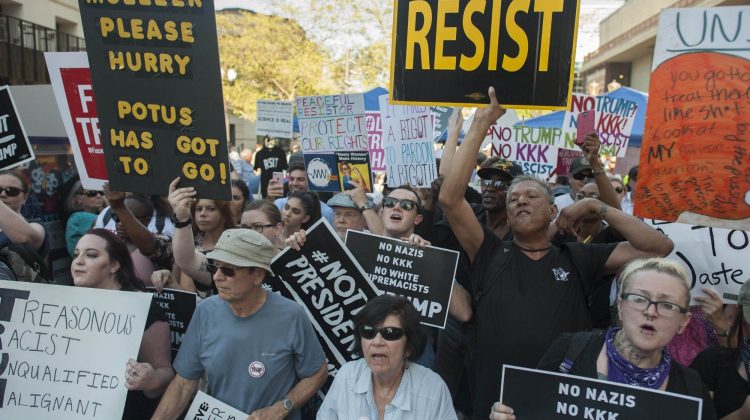 Last week, Rutgers University historian David Greenberg chided his fellow Democrats for “taking the low road” in their opposition to Donald Trump and failing to practice civility. Here is a taste of his piece at Politico:

Trump and his followers have already shown their contempt for the practices and gestures that help us live amicably with our ideological opposites. Joining Trump in the project of trashing the unwritten rules of public conduct won’t change his policies or governing style. But it will betray our own values and make it harder, once he’s gone, to reconstitute a decent, humane politics. We have nothing to gain from the eradication of a politics-free zone, from a war of all against all that greenlights once-verboten behaviors and permeates once-private spaces.

Besides, as the events of the late 1960s and early 1970s show, the outrageous and obnoxious antics of the militant left ended up hurting their cause. The taunting of public figures isn’t well remembered, and neither will history long record June’s showdown at the Red Hen. But insofar as these actions stem from a determination to score political points by violating civil norms, they—and the repellent and violent methods of extreme protesters more generally—engender a backlash and alienate allies. By 1972, we should recall, a majority of Americans had come to oppose the Vietnam War, but greater numbers opposed the antiwar movement. Nixon cannily positioned himself as upholding law and order—a helpfully ambiguous phrase that lumped together the threats of rising crime, urban riots and rowdy left-wing activism. His invocation of the “silent majority” aimed to bring together those who were put off by the noisy, disruptive and politically extreme protests. Trump, who has openly borrowed Nixonian terms like “law and order” and “silent majority,” has already been using the confrontations with his administration’s officials to shift the discussion from his immigration policies and onto the left’s behavior.

There is a middle ground. It’s entirely possible to take a principled stand against the Trump administration while hewing to honorable methods. In November 2016, Vice President-elect Mike Pence attended a performance of the Broadway musical “Hamilton.” He wasn’t turned away, yelled at, or threatened. But after the show, one actor, Brandon Victor Dixon, spoke for the ensemble in thanking Pence for his presence and then expressing their fears. “We, sir—we—are the diverse America who are alarmed and anxious that your new administration will not protect us, our planet, our children, our parents, or defend us and uphold our inalienable rights,” he said. “We truly hope that this show has inspired you to uphold our American values and to work on behalf of all of us.”

Chris Lehmann of The Baffler is not buying Greenberg’s argument.  Here is a taste of his piece “No Country of Civil Men“:

More telling still is the—wait for it—“middle ground” model of protest that the tongue-clucking Greenberg can see his way clear to approve of. That, gentle reader, was back in the early days of the Trump White House, when Brandon Victor Dixon, a cast member of Hamilton, briefly stepped out of character to chide Mike Pence for traducing our diverse republic and its noble immigrant traditions. What made this protest civil and honorable, Greenberg argues, is that Dixon thanked the vice-president for attending Broadway’s deeply confused celebration of one of our least democratic founders. “We truly hope,” Dixon sonorously announced to the erstwhile shock-jock bigot now commanding the trappings of state power, “that this show has inspired you to uphold our American values and to work on behalf of all of us.”

By Greenberg’s own preferred metric of backlash-provocation, Dixon’s appeal to the better angels of Mike Pence’s nature was clearly a miserable failure: Trump’s administration is more devoted than ever to transforming virtually every arm of our executive branch into a bastion of white supremacy and moneyed corruption—waving the standard of backlash politics in the abject service of the continued rule of the one percent.

Yet as is always the case with our civility policers, the public displays of protest that win their coveted approval are much more a reflection of social mood and elite consensus than any vulgar quest for measurable policy results. And here, of course, the setting says everything: a $2,000-a-ticket Broadway extravaganza rehabilitating the civic reputation of a bona-fide American autocrat. This is the high civic culture that the David Greenbergs of the world see imperiled by public confrontations with the Trump administration’s corps of on-the-make racist apparatchiks.

To which one would just add a small historical disclaimer—our recently minted liberal saint Alexander Hamilton was killed in a duel, fought over the results of the 1800 presidential election (so much, it seems, for the myth that our founder promoted decorous intra-ideological comity in designated spheres of private repose, quarantined from ugly political confrontation). That’s something to ponder, genteel liberal tone policers, over a cheese plate to be shared with the loyal child-caging opposition.

Both writers make some good points.  (I am sure Lehmann will accuse me of trying to find a civil “middle ground” here).  I think Greenberg’s concern about civility is on the mark.  Someone needs to take the high road.  On the other hand, Greenberg fails to realize that American politics have never been civil.  Moreover, Lehmann is correct in pointing out the class-based roots of “civility.”