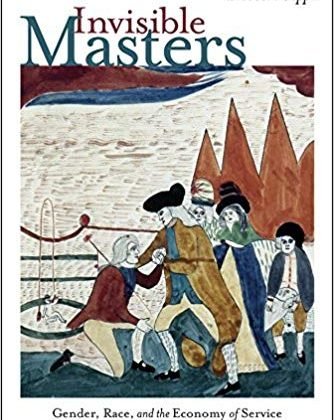 Elisabeth Ceppi is Associate Professor of English at Portland State University.  This interview is based on her new book Invisible Masters: Gender, Race, and the Economy of Service in Early New England (Dartmouth University Press, 2018).

JF: What led you to write Invisible Masters?

EC: The project began as an essay I wrote in my first year of graduate school (so long ago: 1992-3!) about the 1672 case of the demonic possession of Elizabeth Knapp, a sixteen-year old residing as a servant in her minister’s household. Over the years I revised that essay multiple times; it eventually became my MA thesis, a chapter of my dissertation, and a journal article. But even so, I knew I had only begun to figure out what Knapp had to teach about the meaning of service in early New England. After finishing a term as English department chair in 2009, I began new research on the theology of service in sermons by the leading ministers of the first generation of Puritan migration, which led me to reconceive the project and convinced me that it needed to be a book, not a series of essays.

JF: In 2 sentences, what is the argument of Invisible Masters?

EC: Perhaps because it is such a commonplace of Christian labor, the metaphor of Puritans as “servants of the Lord” has generated almost no scholarly attention; the book argues that it was the foundation of a complex discourse of obedience and authority that powerfully shaped the lived experience of covenant theology in New England households, churches, public governance, and economic relations. As they developed a moral language for a racializing culture of service, Puritans transformed the traditional lived metaphors of faithful service and its opposite, hypocrisy, into an ethic of mastery.

JF: Why do we need to read Invisible Masters?

EC: As I suggest above, it is the only study that historicizes and interprets service—and the figure of God as Master—as an essential concept in Puritan theology and social life. In doing so, it revises familiar accounts of early New England’s relationship to modernity, including the emergence of the “Protestant work ethic” and of the affectionate family model from the patriarchal “little commonwealth.” It contributes to the growing body of scholarship on racial slavery in early New England by emphasizing its embeddedness in religious culture, and by showing how “the public” emerged as a space of white mastery over racial others. It offers new readings of canonical works of early American literature, including Mary Rowlandson’s captivity narrative, Benjamin Franklin’s Autobiography, and the works of Mohegan minister Samson Occom. Finally, I also hope the example of the Puritans invites us to question how and why we privilege mastery over service as values in our contemporary culture and provides some insight into how ideals of public service and self-mastery came to be bound to distinctions of gender, race, and class.

JF: When and why did you get interested in the study of the past?

EC: I teach and study literature, but my decision to specialize in early American literature was a swerve. I went to grad school with the intention of studying modernism, but in my second term I took a class to fill a pre-1800 requirement, “Typologies of Gender in Puritan America,” taught by Janice Knight (this is where I first encountered Elizabeth Knapp). The class was a fascinating introduction to a world of ideas and language and genres that seemed alien and strange and not at all like my idea of literature, and yet at the same time felt so vital in its power to pose urgent questions to the present. I loved the challenge of using my skills at interpreting language and literary form to think historically, to try to understand what these texts meant to those who wrote them and those they wrote about, and also to explain why they still matter today.

EC: I have started working on an essay about Theodore Winthrop’s 1863 novel, The Canoe and the Saddle, a fictionalized account of his travels to Oregon, Washington, and British Columbia in 1853. The novel became a best-seller after Winthrop died in the Civil War but has been neglected by scholars. His depictions of his indigenous guides and the incursions of English culture on the romantic landscape both conform to and defy expectations in interesting ways, but I was particularly intrigued by a passage in which Winthrop’s narrator satirically refers to a troubled Englishman he encounters as a “drapetomaniac,” a notorious concept from scientific race management (devised by a Mississippi doctor, Samuel Cartwright) that pathologized the enslaved who sought to run away from their masters. The essay will examine what Winthrop’s extension of this term to the Pacific Northwest reveals about the role of travel literature in New England’s culture of management.