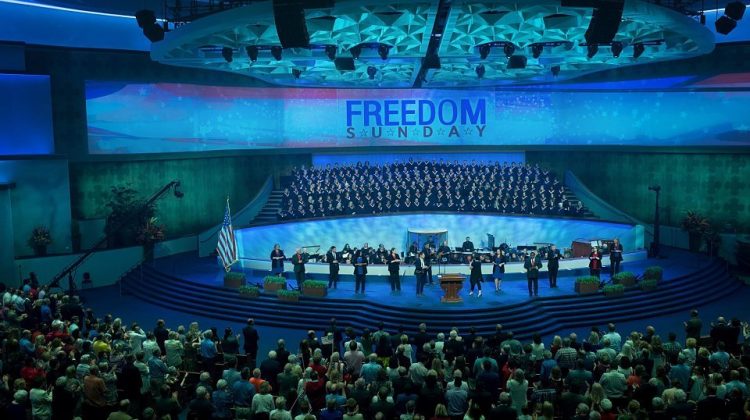 The congregation and the choir waved American flags.  Many of the worshipers wore red, white, and blue.  They sung the Star Spangled Banner.  There were fireworks.  People were raising their hands, like they do in evangelical worship.  The pastor read a letter from the Vice President of the United States and then said “aren’t you glad we have a man like this standing behind our great president Donald Trump.”

Yes, all of this happened yesterday at Robert Jeffress’s First Baptist Church in Dallas.  It was “Freedom Sunday” and the service was devoted to “patriotic worship” and a sermon titled “America is a Christian Nation.”

First, a quick word about “patriotic worship.”  I don’t think such a thing is possible in the Christian tradition.

Webster defines “worship” as a verb that means “to honor or reverence as a divine being or supernatural power.”

By these definitions, “patriotic worship” is to show honor, reverence, or devotion to one’s country as one might show honor or reverence to a divine being or supernatural power.

Since Christians only worship the God of the Old and New Testament, then “patriotic worship” has to be a form of idolatry.

OK, now on to the sermon.

Robert Jeffress rattled off a lot of quotes and facts about the relationship between religion and the founding.  Many of them were not true.  For example, Jeffress’s echoed GOP activist David Barton when he claimed that 52 of the 55 of the signers of the Declaration of Independence were “orthodox Conservative Christians.”

Some of the things he said were true, but they were taken out of context.

At other times, Jeffress argued that the founders were Christians based on their vague references to God.  For example, one could believe in “providence” and still reject the idea that God incarnated Himself in the form of man, died on a cross, and rose from the dead to save sinful humans.

Anyone who reads this blog regularly knows that I have two major problems with “Freedom Sunday” as it was conducted at First Baptist Church-Dallas.  (Yes–I watched the service).

I am not going to go any further here since I have written about this kind of thing many times before..  Instead, I will recommend some resources:

John Fea, Was America Founded as a Christian Nation?: A Historical Introduction

John Fea, Believe Me: The Evangelical Road to Donald Trump.  This book provides a more thorough debunking of Jeffress’s sermon based on its 2017 iteration.

And this post:  What Was Being Worshiped Yesterday at First Baptist Church in Dallas?