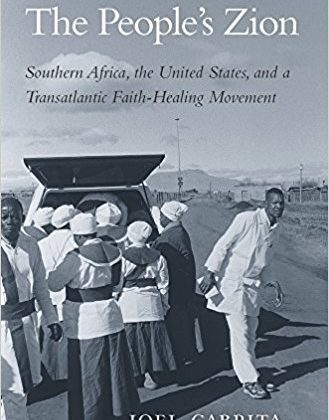 Joel Cabrita is Lecturer in World Christianities on the Faculty of Divinity at the University of Cambridge.  This interview is based on her new book The People’s Zion: Southern Africa, the United States, and a Transatlantic Faith-Healing Movement (Harvard-Belknap, 2018)

JF: What led you to write The People’s Zion?

JC: I’ve long researched Southern Africa’s ‘independent churches’, those African-led Christian organizations that emerged at the beginning of the twentieth century and which defined themselves independently of European or North American missionary oversight. In the course of doing research for a separate project, I came across an exciting stash of hundreds of letters exchanged between independent church ministers in South Africa and their counterparts in Illinois, USA. I realized that there was a new story waiting for me about a lively transatlantic exchange between African and American Christians that hadn’t yet been told.

JF: In 2 sentences, what is the argument of The People’s Zion?

JC: That evangelical faith-healing Christianity resonated with working-class believers of all races amidst the tumultuous social development of the twentieth century, and that we can only understand these developments in South Africa if we look to what was happening across the Atlantic Ocean in the United States during the same period.

JF: Why do we need to read The People’s Zion?

JC: I’m a historian of Southern Africa, and this is my first – and much enjoyed -foray into American history. But I actually started life as a theologian. I soon became more interested in the empirical study of human life and found theology entirely too speculative for my liking. I quickly fell in love with the intellectual possibilities afforded by using archives to understand the past.

JC: I’m currently writing a history of the Lutheran missionary-anthropologist, Bengt Sundkler, who did path-breaking research on religion in Southern Africa. I’m arguing that much of his work couldn’t have happened without the extensive assistance of a network of African research assistants, informants and collaborators. As was usual for the period Sundkler was writing in, these assistants were seldom mentioned by name or acknowledged. But I think figures such as these need to be reassessed by scholars as key players in the co-production of anthropological knowledge in colonial Africa.