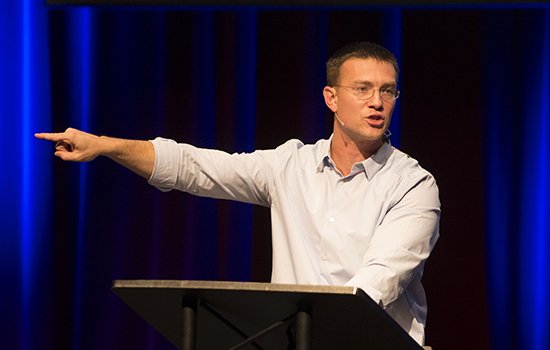 I want to be clear, this has nothing to do with Mr. Pence personally.  From my understanding he is a born-again Christian man and attends one of the churches in our convention.  I think we should pray for him in his all-important service of our country.

But as a pastor that strives to grow in unity, gospel faithfulness, and mission efforts in our local churches, I have three brief concerns regarding this decision and the way it effects our churches.

The first is the unity of our church.  For many years we have been talking about loving and listening to our minority brothers and sisters.  This invitation [to Pence] does nothing to suggest that we actually listening.  Not only are many of us in this room hurt and bothered by this invitation, but also many of our minority brothers and sisters will especially be hurt by this invitation and I fear it will communicate to many of them that our political associations are more important than our associations with them.

Secondly, in regards to the clarity of the Gospel.  What binds this Convention together is the Gospel of Jesus Christ.  Because of that, this Convention ought to be marked by the things we share in common, not things that faithful Christians can disagree with.  By associating publicly with any administration, we send a mixed message to our members suggesting that to be faithful to the Gospel we ought to align with a political administration.  We must do all that we can to preserve the purity of the Gospel, and this invitation [to Mike Pence] works against it.  I even had a perspective member this week ask me if they needed to vote Republican in order to join our church….

Thirdly, and finally, the safety of our overseas workers.  Whether rightly or wrongly, this current administration provokes strong reactions and in some cases great hostility in many regions of the world.  I’m not here to debate those policies at all. But publicly aligning our workers with this or any administration puts our workers in unnecessary risk because of the decisions of an administration.  What is said in Washington echoes around the world and having Mr. Pence come [to the SBC meeting] further hinders our work I think.

In conclusion, I would like us to consider Romans 14:19: “So then let us pursue what makes for peace and for mutual upbuilding.”  Which is the reason I would like us to reconsider this invitation because brothers and sisters right now there is a world filled with people who are going to hell and what we need to be about is the Gospel, and anything that can distort that I think is a step backward and not a step forward.  Thank you.

At this point, Grant Ethridge, the “chairman of the committee on order of business,” took the microphone.  Here is what he said:

Thank you Mr. President.  First of all dear brother I want you to know I love and respect you.  I hear what you are saying in your concern.  And I am personally very sensitive to the issue that you have raised.

I pastor in a city that is 53% African American.  Praise God–to his Glory–our church has moved from being an all-white, Republican church to a church that is multi-generational, multi-ethnic, and multi-site.  So again, I hear your concerns and I am very sensitive to it.

I want the messengers to hear the heart of our committee.  Our program recognizes and honors local, state, and national leaders.  Let me be clear: the Southern Baptist Convention aligns itself with no political party.  Our loyalty is to King Jesus, the King of Kings and Lord of Lords.  You need to know that the White House reached out to us.  Our president, Dr. Steve Gaines, asked me to follow-up on the opportunity. Our interim president of the EC Agi Boto asked me to handle this specific matter.

So in keeping with our SBC history, we have had many government official to address our convention.  We have many other government officials who will be addressing the convention today and tomorrow.  So as in keeping with what the precedent has been in the past, I have sought to carry out my duties in a Christ-honoring way.  Since we’re Baptists the Bible is our final authority for faith and practice, I will let the word of God speak for and to us.

1 Timothy 2:1: “First of all I urge that petition, prayers, intercessions, and thanksgiving be made for everyone, for Kings and all those who are in authority.” Verse three says “this is good and it is pleasing in the sight of God our Savior.

Romans 13:1 says “let everyone submit to the governing authorities.  Titus 3:1 says “Remind them to submit to rulers and authorities, to obey, to be ready for every good work, to slander no one, to avoid fighting, to be kind, always showing gentleness to all people.”

I Peter 2:17 for me really sums it up. Honor everyone.  Love the brethren.  Fear God.  Honor the emperor, or some of your translations will say honor the King.  In Act 25:11, Paul even said I appeal to Caesar. So as a committee, we feel to not show hospitality to those in authority would be a bad testimony for Southern Baptists.

On a personal note, if President Obama’s White House had contact us and I was chairman of this committee, we would have exercised the same judgement and welcomed them to the Southern Baptist Convention.

The word of God is clear about our response to all governments, from Rome to the U.S., from Caesar to the President and I believe we respect the position regardless of whether or not you supported or voted for the person.

Therefore we strongly urge the messengers to extend a biblical Christ-like welcome to the Vice President of the United States.  Thank you.

You can judge for yourself what to make of these statements, but I have two very quick thoughts: