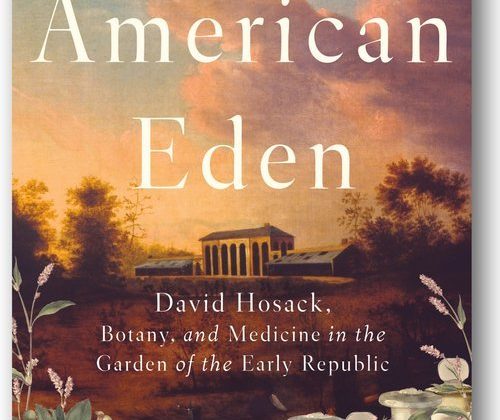 Victoria Johnson is Associate Professor of Urban Policy and Planning at Hunter College of the City University of New York.  This interview is based on her new book American Eden: David Hosack, Botany, and Medicine in the Garden of the Early Republic (Liveright, a division of W.W Norton, 2018).

JF: What led you to write American Eden?

VJ: Eight years ago, in the course of research for a journal article on contemporary American botanical gardens, I came across David Hosack (1769-1835) for the first time (in Peter Mickulas’s Britton’s Botanical Empire). I love New York City, and I was floored to learn that Rockefeller Center had once been a botanical garden—the first founded in and for the young United States. I knew immediately that I wanted to write a book about Hosack. He was a polymath and involved in several dozen organizations (quite a few of which he helped found) and he was not famous enough to have had a critical edition of his papers published. Following his trail as I reconstructed his life eventually took me to about thirty archives in the US and Europe.

JF: In 2 sentences, what is the argument of American Eden?

VJ: There is a botanical garden two centuries old buried under one of the most iconic urban spaces in the world. The man who created it, David Hosack, is a forgotten architect of New York’s rise to civic primacy in the nineteenth-century United States, and his life story thrusts us into the post-Revolutionary generation’s battles over what kinds of institutions make cities and nations truly great and stable.

JF: Why do we need to read American Eden?

VJ: Many, many historians have written eloquently and rigorously on politics and natural history in the early Republic, and I’m deeply indebted to them for their scholarship. Because American Eden is a biography, we get to see through David Hosack’s eyes the very fraught political relationships all around him and to feel the excitement and heartbreak of institution-building and scientific inquiry. In the process, certain figures from the Founding era take on new complexity: not only the shadowy Hosack, long known simply as the attending physician at the Hamilton-Burr duel, but also Hamilton and Burr themselves, both of whom loved botany and horticulture. New York City likewise comes into clearer focus in American Eden. We don’t usually think of nature, agriculture, and natural history when we think of New York in the early Republic, but Hosack botanized right in the city as well as on Manhattan’s beaches and farms and in its meadows and woodlands. Finally, I’d add that while history is a field of intellectual inquiry that matters regardless of any explicit links we make to our present circumstances, I’ve found Hosack’s struggles enlightening as I try to make sense of contemporary American political culture and our divided views on science and nature.

VJ:  I’ll answer the “historian” part first and then the “American” part. My PhD is in sociology, with a specialty in organizational sociology, but I was drawn to historical research early. One of my dissertation advisors in Columbia’s sociology department was Charles Tilly, who had a huge influence on my choice of dissertation topic: political relations between the French government and the Paris Opera from Louis XIV to Napoleon. That became Backstage at the Revolution (Chicago, 2008). For my second book, American Eden, I crossed the Atlantic and began studying American history because of my fascination with David Hosack and his enormous, unacknowledged contributions to New York, his young country, and translantic scientific networks.

VJ: Book tour! I will be sharing Hosack’s story of intense civic engagement and devotion to science with as broad an audience as wants to listen, in both the US and the UK; I have talks lined up running through 2020. In the meantime, I’m slowly starting to think about what comes next (to quote a certain king).