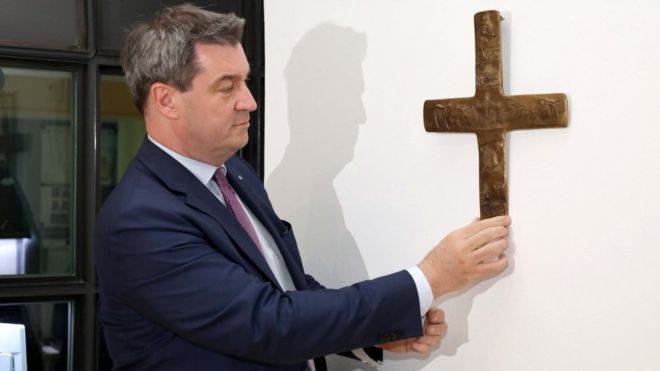 On Tuesday of this week I spent the afternoon with Seth Perry of the Department of Religion at Princeton University and Dave Krueger of Temple University working with international religion scholars from Argentina, Azerbaijan, Romania, Bangladesh, Cambodia, Indonesia, Sudan, India, Ukraine, Slovenia, Russia, Burma, China, Bulgaria, Tunisia, Mongolia, and Cameroon. They were selected by the U.S. State Department to spend six weeks in the U.S. for an institute on religious pluralism run by Temple University’s Dialogue Institute.

Our session was titled “Christian Nation or Nation of (Mostly) Christians: A Panel Discussion on the Role of Christianity in Founding Documents and the Early Formation of American Culture.” We had some great conversation and discussion about what it means to call America a “Christian nation.”

I thought about this conversation when I learned that the German state of Bavaria just passed a law requiring a cross to be placed at the entrance of service buildings.  The crosses are meant to serve “as a reminder of the historical and cultural influence of Bavaria.”

Here is Griffin Paul Jackson’s article on the new law at Christianity Today:

Markus Söder, premier of Germany’s Christian Social Union party (CSU), was the driving force behind the new law, which went into effect on June 1 and has caused a schism between church and state leaders.

Söder called the ruling an “affirmation of our cultural and historical, as well as spiritual values.” He acknowledged the cross is “primarily a religious symbol,” but also said it is foundational to the secular German state.

The law is viewed by many as an effort to lock down conservative voters in the run-up to state elections this October. The CSU currently dominates the state’s legislature, but some of its core constituency has been lured toward the anti-immigration Alternative für Deutschland party (AfD) in light of more than 1 million refugees—most of them Muslims from the Middle East and North Africa—who have flooded into Germany over the last few years.

The decision, which was accepted in April and has now been implemented, is a key component in an attempt to bring voters back.

In Bavaria, where more than half of the population is Catholic and 1 in 5 are Protestants (while 4% are Muslim), the move to promulgate crosses in public spaces is popular. More than 56 percent of residents favor the decision, though only 29 percent of Germans nationwide do likewise, according to a poll for the Bild am Sonntag, Germany’s largest Sunday newspaper, and cited in the Independent.