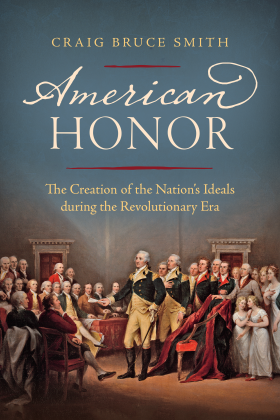 Craig Bruce Smith is Assistant Professor of History at William Woods University.  This interview is based on his new book American Honor: The Creation of the Nation’s Ideals during the Revolutionary Era (University of North Carolina Press, 2018).

JF: What led you to write American Honor?

CBS: There are a number of factors that led me to write American Honor, but I basically set out to author a book that I would like to read.

I was deeply interested in the American Revolution and ethical questions. While there have been countless works on the Revolution itself, I never encountered a title that explored the connections between ethics and the Revolution—so I set out to write my own. It seeks in many ways to revive the debate over questions of the Revolution’s causes and effects that has largely disappeared in recent historical literature.

It was also an attempt to rehabilitate the concepts of honor and virtue, which seem antiquated and elitist to a modern audience. But my research revealed that these concepts actually became quite democratic and were simply an eighteenth-century reflection of our present understanding of ethics.

Finally, a great deal of recent academic history has taken aim at demystifying or vilifying the Founders to the end that the ideals of the American Revolution are often dismissed as rhetoric. My goal was to invite the reader to take the Founders’ beliefs and words seriously and to see how their understandings of honor, virtue, and ethics were the foundation of the new nation.

JF: In 2 sentences, what is the argument of American Honor?

CBS: American Honor is an ethical history of the Revolution, advancing that there was a transformation in American ethical thinking that led to and became intertwined with the Revolution itself. The ideals of honor, virtue, and ethics were a unifying element that became democratized through service to the nation and thus expanded to people of diverse races, classes, and genders.

JF: Why do we need to read American Honor?

CBS: One need only look at the news headlines to see that issues of ethics and honor still matter in virtually every aspect of society. American Honor presents how the Founders of various backgrounds united based on a collective ethical understanding of honor as service to the nation—something that is as relevant now as ever before.

Honor was a major cause of the American Revolution, and omitting it prevents us from fully understanding the motives behind resistance against Britain and the founding of the United States.

Also, while there have been other excellent works on honor (such as those by Joanne Freeman, Bertram Wyatt-Brown, and Caroline Cox), this is the first book to explore honor as a changing concept over an extended geographical and chronological period. It is built on primary research from over thirty different archives in the US and UK, which allows it to show an expansive understanding of how honor changed in early America.

Ultimately, the book presents the research and analysis in the form of a narrative that features collective biography (such as Washington, Franklin, Adams, and Jefferson) and storytelling to arrive at its conclusions.

CBS: History was always my favorite subject, but it wasn’t until Ron Vallar’s AP US History class during my junior year at Holy Cross High School (in Queens, N.Y.) that I really became hooked. Vallar was so passionate in presenting history as a story rather than as a repetitive memorization of names and dates. He was the first person to show me what history could be—and without him I would not be an American historian today.

Vallar provided the spark, but starting college I still thought I would be a lawyer or a judge. It was the faculty at St. John’s University (also in Queens) that actually showed me I could make a career of history and David Hackett Fischer (my PhD advisor at Brandeis University) who ultimately helped me to achieve my goal.

Why become an American historian? The simple answer is out of love of the subject. The more complex one is that our past matters and the nation’s founding ideals continue to influence our present and future. The American Revolution and the Founding Era always resonated with me, and my goal has been to try to convey this same connection to students and readers.

CBS: My next project “The Greatest Man in the World: A Global History of George Washington,” follows different nations’ changing perceptions of Washington from his emergence during the French and Indian War through his death and into the modern day. Named the “Father of His Country,” Washington was indelibly associated with being an American figure. Traditionally, he has been interpreted solely as an American icon, but in actuality he developed into a symbol for humanity through a complicated path of personal, national, and international growth. Framing early America within a global history, this project is the first to examine Washington as a world figure, rather than one that was exclusively American.