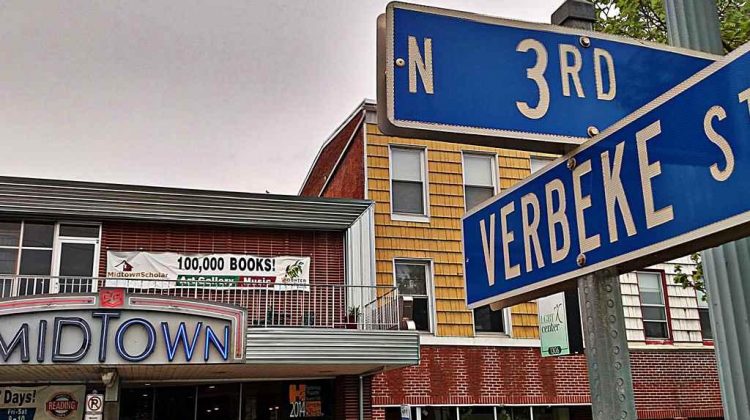 Digital Harrisburg is a digital public humanities project created by students and faculty of Messiah College and Harrisburg University of Science and Technology that explores the history and culture of the Harrisburg, Pennsylvania area.  Read more about it here.

Over at Harrisburg Magazine, write Rick Dapp has used Digital Harrisburg to learn more about four blocks on Verbeke Street.  Here is a taste of his article:

Memory is an elusive thing, often distorted by time and the inclusion of unintentionally specious fictions in the retelling of stories handed down from one generation to another. Occasionally a sliver of truth finds its way into our awareness and triggers a desire to expand our knowledge of it. When there is tangible evidence it’s a relatively uncomplicated process. When there is nothing to perceive imagination – and some research – is required.

If there is one pair of structures that provide an anchor for the Midtown section of the city, it’s the Broad Street Market. Despite the fact that there is no Broad Street in the city, it goes by that name nonetheless. In the nineteenth century there was an effort to make the name stick, but Verbeke Street prevailed. Named for William K. Verbeke, the street has two distinct characteristics. There is the section running from North 6th Street to 3rd Street, and, like a number of similar city thoroughfares, it terminates and then resumes on Cameron Street….

How does one glean this knowledge that allows the imagination to recreate the past? It’s quite simple, you simply type in (on your computer – were back in real time again) https//digitalharrisburg.com/2014/12/16/explore-harrisburg-in-1900

The interactive map that has been developed as a collaboration between Messiah College, Harrisburg University of Science and Technology and the Historical Society of Dauphin County. The participants in this invaluable effort scanned the entire 1901 Harrisburg Title Company Atlas. Data includes information from the federal census that allows the viewer to determine the location of a specific property and numerous personal indices relative to families or individuals living within a specific property in 1901.

Log on and take a look at 314 Verbeke. You’ll never look at those vacant spaces on Verbeke west of the Millworks in quite the same way again.