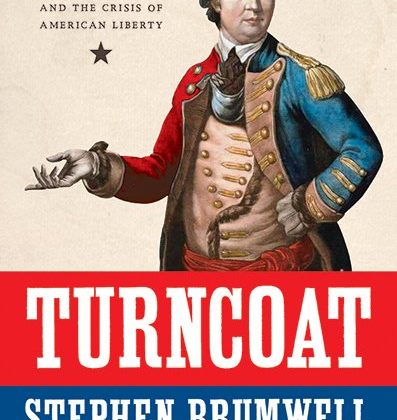 Stephen Brumwell is a freelance writer and independent historian based in Amsterdam, the Netherlands.  This interview is based on his new book Turncoat: Benedict Arnold and the Crisis of American Liberty (Yale University Press, 2018).

JF: What led you to write Turncoat?

SB: I wrote Turncoat after becoming fascinated by the central enigma of Benedict Arnold’s remarkable life. Why would an officer famed for his bravery in the American Revolutionary cause, who was clearly obsessed with his reputation as a man of honor, behave in a way that would be widely interpreted as utterly dishonourable? I was sceptical about the usual explanations – greed, or resentment at his shabby treatment by Congress – and wanted to re-examine all the available evidence to see if I could find a more convincing explanation for his behaviour.

JF: In two sentences, what is the argument of Turncoat?

SB: By reassessing Arnold’s military career, Turncoat seeks to explain how he gradually came to believe that his country’s interests would be best served by ending the damaging civil war between Britain and her American colonies. Faced with a dysfunctional, ineffective Congress that seemed uncaring about the men who were actually fighting for American liberty, and hounded by Pennsylvania’s Supreme Executive Council, Arnold concluded that the cause in which he’d made his illustrious name had lost its way, and that he could better devote his talents to restoring Crown rule, and peace to the fractured British Empire.

JF: Why do we need to read Turncoat?

SB: With its dramatic twists and turns, the treason of Benedict Arnold is deservedly one of the best known stories of the American Revolutionary War. By uncovering archival sources not previously used by scholars, Turncoat offers a fresh and challenging interpretation of a tale that still resonates today. For example, this new evidence not only supports the contention that Arnold’s primary motivation in changing sides was ideological, but also removes any lingering doubt that his wife, Peggy Shippen, was actively involved in his treasonable correspondence with the British.

JF: When and why did you decide to become an American historian (or how did you get an interest in the study of the past)?

SB: Growing up in an area of southern England full of castles, which I explored at weekends with my parents and brothers, I’ve loved history for as long as I can remember. When I finally went to university, and was given an opportunity to undertake postgraduate research, I decided to focus on the French and Indian War (a conflict in which I’d long been interested), seeking to contest existing stereotypes of the British redcoats who fought it.

I’m still finalising my next book project, although I have several ideas, involving both non-fiction and fiction. In either case, I’m keen to draw upon my interest in the past, although it’s possible that I’ll stray outside my specialist field of British-American military affairs in the second half of the eighteenth century, and tackle something different. Whatever the subject and approach, my objective will be to present a compelling narrative with an authentic backdrop.