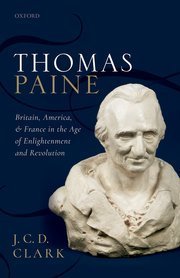 Jonathan Clark is Hall Distinguished Professor of British History at the University of Kansas. This interview is based on his new book, Thomas Paine: Britain, America, and France in the Age of Enlightenment and Revolution (Oxford University Press, 2018).

JF: What led you to write Thomas Paine?

JC: Chance, the most important agent in human affairs. I was invited to write a brief essay to accompany the recent Yale UP edition of Paine’s selected works. I thought this would be easy, since I had read, and taught, Paine for many years. But as a preparation, I decided to read through Paine’s entire printed output. As I read, I reluctantly concluded that I had not understood Paine at all … and that nobody else had. I finished the essay, but I wrote a book as well.

JF: In 2 sentences, what is the argument of Thomas Paine?

JC: Paine is one of those famous figures who have been heavily mythologized, turned into ‘usable’ versions of themselves to answer the needs of later movements. The book argues that the ‘historic’ Paine was, to use a metaphor, more the inheritor of an old house than the architect of a new one; a man of his age, not the inspired prophet of a future modernity; and that this argument, if justified, calls in question the construction of ‘modernity’ itself.

JF: Why do we need to read Thomas Paine?

JC: Reinterpreting Paine allows us better to understand a wide variety of causes and issues of which recent historiography treats him as a privileged interpreter, including the American and French Revolutions, the nature of the societies they launched, reforming and revolutionary movements, and the current hegemony of natural rights discourse.

JC: I am not an American historian; I am an historian of Anglo-America, a shared transatlantic culture in the eighteenth century. I contend that there was little, and perhaps nothing, that was specifically American about the causes of the American Revolution.

JC: A history of the Enlightenment. It will show how this famous movement was devised as a series of genealogies, projected back onto the past to provide justification for a series of twentieth-century crusades.