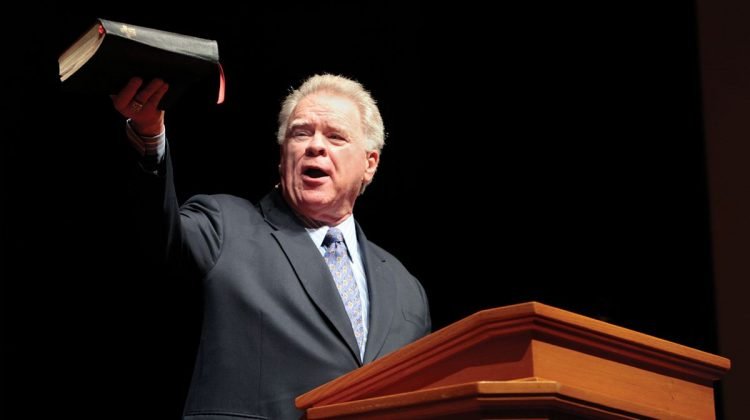 A few days ago, in a post on April Armstrong’s powerful piece on life at Southwestern Baptist Theological Seminary, I wrote: “I imagine we will hear more stories like the ones April Armstrong has shared at the website #SBCToo: Breaking the Southern Baptist Seminary Silence.”

Sadly, it looks like I was correct.  Paige Patterson is now out completely at Southwestern, but more and more stories about life under his authoritarian regime are rolling in.  Here is a taste of Sarah Jones’s piece at The New Republic:

As president, he earned a conservative reputation on gender issues. In 2007, SWBTS terminated the contract of a female theology professor, Dr. Sheri Klouda, explicitly based on her gender. A spokesman for the school told the Associated Press at the timethat the decision to remove Klouda represented a “return” to the seminary’s “traditional, confessional, and biblical position.” In an email to me, Klouda described Patterson’s attitude toward women as “condescending and dismissive,” and added that prior to Patterson’s arrival at SWBTS, she had been treated with respect, first as a student and then as a professor in her own right.

In interviews, alumnae told me that the seminary could be hostile toward female students. “When Patterson was talking about women or the role of women in the church, that made the seminary feel like it was not the most comfortable place to be,” Armstrong told me.

Tricia Dimmitt, who attended SWBTS with Armstrong, echoed her sentiments. “I appreciate my theological education and I made good connections with students,” she said. But there were issues. For example, Dimmitt took a co-ed preaching class, though she did not intend to become a pastor. Dimmitt and her two female classmates had the option of delivering a practice sermon to female friends instead of to a mixed-sex group, and, feeling peer pressure, Dimmitt chose to preach to women. She still expected her male professor to grade her work. Instead, she says, the professor sent his wife in his place.

“His wife was a communications major, so she came and listened to our sermons and graded them,” Dimmitt told me. “I thought he was going to be grading them and that we were just going to invite our female friends to listen.”

Discrimination didn’t stop at the classroom door. Mary Burbrink, who says she was hired as the seminary’s first female patrol officer in 2013, described rampant discrimination at work. In a seven-page letter mailed to SWBTS trustees ahead of their decision to ease Patterson into retirement, she claimed that her supervisors regularly treated her differently because of her gender. “I remember always being sent away when we would go to calls of a serious nature. … I would arrive and would promptly be sent away by my supervisor once he arrived on scene with another officer,” she wrote.

Burbrink, a former Marine, told me that she’s used to being one of the only women in a group of men. But she said her experiences at SWBTS were unusual. She told me that she wasn’t allowed to be alone with any of her male colleagues, and that supervisors assigned her menial tasks more often than they did the men. She added that her experiences on the job reflected a general campus atmosphere toward women. “I felt like a petty annoyance on my best day, and on my worst day I felt like I was an evil seductress hell-bent on destroying the men around me, just because I was a woman,” she said, a gendered perception she believes the school actively reinforced.

She was particularly disturbed by a 2014 chapel sermon delivered by Patterson, during which he condemned women who dressed like “harlots.” “He was talking to the women,” she recalled. “And he asked us if we dress like harlots, and he said that if we dress like harlots and we cause our brothers and Christ to stumble into sin then, you know, we’re personally responsible for their sin.”

Burbrink referred to the sermon in her letter to trustees, and an archived recording confirms her characterization of its content. “May I just pause a moment and ask you, young ladies, is your attire the attire of a harlot? How do you dress? How you dress is a responsibility you have before God. You look like the world, you act like the world. Not long until you’ll be identified with the world. And you’ll be a part of the fall of some lustful man and your own fall also,” Patterson said. He went on to ask women in the audience if they are “loud and boisterous.” “That’s not going to be of God. That’s not what he’s looking for. He’s looking for the meek and the quiet spirit,” he added.

Burbrink, then a student in the school’s biblical counseling program, said she eventually began suffering from severe anxiety, which she attributed to an “emotionally and verbally abusive” romantic relationship and a “toxic” environment at work and in school. But she found little support. “I was hearing from them that I was depressed because I didn’t have enough faith in God, and I don’t really think that that’s a very responsible way to handle someone,” she told me.

Burbrink eventually left SWBTS without completing her degree. Asked if she believes the school has adequate resources available for women in abusive relationships, she answered emphatically: “No. No, I do not.” (The Association of Certified Biblical Counselors, which sponsors a course at SWBTS, teaches that anxiety and depression have spiritual dimensions and advocates prayer as a treatment for psychiatric disorders like depression.)