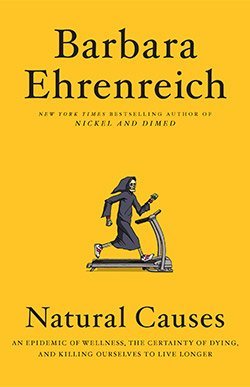 Check out Yale historian Gabriel Winant‘s review of Barbara Ehrenreich‘s new book: Natural Causes: An Epidemic of Wellness, the Certainty of Dying, and Our Illusion of Self Control.  Here is a taste:

Ehrenreich contemplates with some satisfaction not just the approach of her own death but also the passing of her generation. As the boomers have aged, denial of death, she argues, has moved to the center of American culture, and a vast industrial ecosystem has bloomed to capitalize on it. Across twelve chapters, Ehrenreich surveys the health care system, the culture of old age, the world of “mindfulness,” and the interior workings of the body itself, and finds a fixation on controlling the body, encouraged by cynical and self-interested professionals in the name of “wellness.” Without opposing reasonable, routine maintenance, Ehrenreich observes that the care of the self has become a coercive and exploitative obligation: a string of endless medical tests, drugs, wellness practices, and exercise fads that threaten to become the point of life rather than its sustenance. Someone, obviously, is profiting from all this.

While innumerable think pieces have impugned millennials’ culture of “self-care”—and argued that the generation born in the 1980s and ’90s is fragile, consumerist, and distracted—Ehrenreich redirects such criticisms toward an older crowd. Her book sets out to refute the idea that it’s possible to control the course and shape of one’s own biological or emotional life, and dissects the desire to do so. “Agency is not concentrated in humans or their gods or favorite animals,” she writes. “It is dispersed throughout the universe, right down to the smallest imaginable scale.” We are not, that is, in charge of ourselves.

Read the entire review at The New Republic.