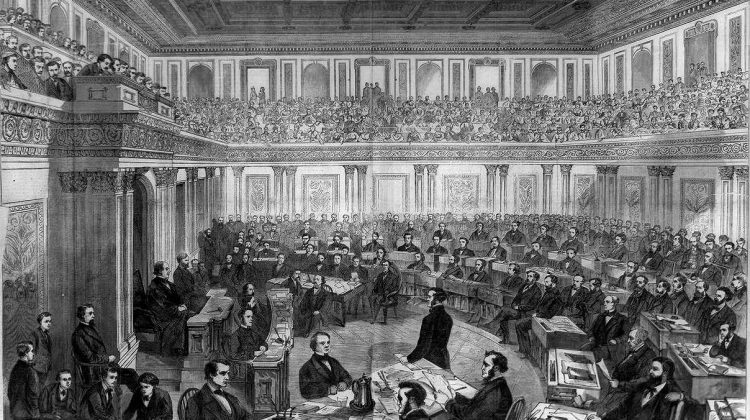 Abraham Lincoln and Civil War scholar Allen Guelzo reminds us what happened when Andrew Johnson was impeached.  The subtitle of his recent Wall Street Journal piece is “Many members of Congress in 1868 hoped to remove a president they merely disliked.  It didn’t go well.”  Here is a taste:

If the Democrats win the House in November, they’ll come under pressure to impeach President Trump. Even if Robert Mueller fails to turn up some astounding surprise, many Democrats want to impeach Mr. Trump because they simply don’t like him. Since the Constitution specifies that a president can be impeached for “Treason, Bribery, or other high Crimes and Misdemeanors,” such a move would mean Democrats consider being disliked by the House majority to be a disqualifying crime.

That is precisely what many members of Congress thought 150 years ago this week, at the conclusion of the first impeachment of a sitting president, Andrew Johnson. The 17th president’s impeachment offers the important lesson that although the mechanism for impeachment is easy, the subsequent process of trial, conviction and removal from office is not. A failure at that stage of the process covers everybody with embarrassment—impeachers and impeached alike.

Guelzo seems to be preparing for the Democrats to take the House.  It is definitely a possibility.