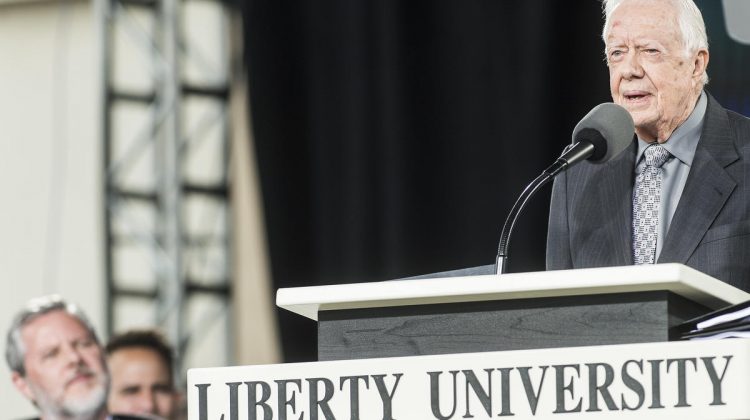 Yesterday I wrote a post on what I thought Jimmy Carter could teach Jerry Falwell Jr. at today’s Liberty University commencement.

Today Carter delivered his address.  In his introduction of Carter, Falwell Jr. could not help but try to compare the former president to Donald Trump.  Falwell Jr. politicizes everything.  Hey Jerry, Liberty University’s commencement is for the graduates, it is not about your court evangelicalism.  Here is what Falwell Jr. said:

Becky and I attended the opening of the Billy Graham Library in 2007 about one month after my father’s death.  And I remember commenting to Becky then, that of the four former presidents speaking that day, Jimmy Carter sounded more like one of us than the rest…President Trump has called me and spoken to me about his appreciation for the former president’s friendship and support…Both Presidents Carter and Trump entered the White House as outsiders to the Washington establishment, and I hope that many more outsiders will follow.  The longer I live the more I want to…give my political support to a person.  Policies are important, but candidates lie about their policies all the time in order to get elected.  The same elite establishment that Jesus condemned remains the real enemy today.

After this, Falwell Jr. praised Carter for his 1976 Playboy interview because Carter followed the teachings of Jesus in Matthew 5:27-28: “You have heard it was said to those of old, ‘You shall not commit adultery.  But I say to you that whoever looks at a woman to list for her has already committed adultery with her in his heart.”  Of course Falwell Jr.’s father, Jerry Falwell Sr., was one of the strongest critics of Carter’s Playboy interview.  This is why it is kind of shocking that Falwell Jr. would go on to say: “It saddens me today to think that so many conservative Christians attacked and demeaned Jimmy Carter in the 1970s for quoting Jesus Christ to a secular magazine.”

So what did Jimmy Carter say to the Liberty University graduates?

Indeed, Jimmy Carter is an evangelical.