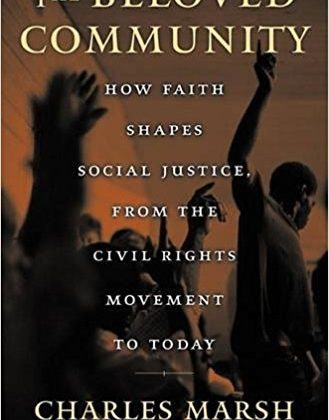 Bishop Michael Curry, the head of the American Episcopal Church, preached the sermon at the royal wedding this morning.  During the sermon Curry quoted Charles Marsh’s book The Beloved Community: How Faith Shapes Social Justice from the Civil Rights Movement to Today.

Ruth Graham has it covered here.  A taste:

The scripture he quoted included the Old Testament prophet Amos, a favorite passage of King’s: “Let justice roll down like a mighty stream, and righteousness like an ever-flowing brook.” The lyrics he chose included the black American spiritual “There Is a Balm in Gilead,” which he introduced by noting that slaves in the American South had sung it “even in the midst their captivity.” The official transcript of Curry’s sermon does not include the mention of slavery, suggesting he was riffing just a bit—not unusual for a preacher, but notable considering Curry riffed in the direction of referencing slavery in front of the queen, not to mention hundreds of wealthy British dignitaries, some of whose family fortunes surely were built on the backs of enslaved people.

The scholars he referenced included the 20th-century Jesuit paleontologist Pierre Teilhard de Chardin, whom the Vatican has long held at arm’s length. Curry also quoted Charles Marsh, a religious studies professor at the University of Virginia. “Jesus had founded the most revolutionary movement in human history,” Curry quotes Marsh writing, “a movement built on the unconditional love of God for the world and the mandate to live that love.” The quote comes from Marsh’s 2005 book, The Beloved Community, which traces the influence of faith on the Civil Rights movement and argues that the spiritual underpinnings of that movement can serve as a source of moral energy today.

Marsh’s book is essentially an argument for the enduring power of progressive Christianity. So was Curry’s sermon, whose central argument was the world-transforming power of love….