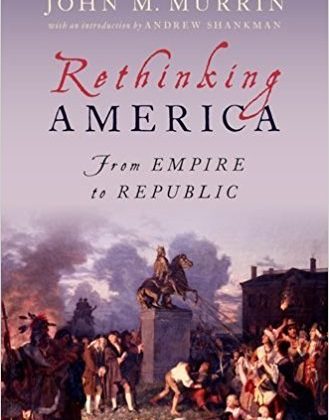 I can think of few early American historians who have had more of an influence on the way I think about the colonial and revolutionary America.  I will always be grateful for his endorsement of my book Was America Founded as a Christian Nation?: A Historical Introduction.

At one point or another, I have taught, or built lectures around, the following Murrin essays:

“The Great Inversion, or Court versus Country”

“A Roof Without Walls: The Dilemma of American National Identity”

They are all in this book.

Here is a taste of the Princeton Alumni Week piece:

Opening lines: “Americans have always shared one conviction about their Revolution: It was a good thing for the United States and the entire world. The revolutionary generation believed that its principles would benevolently affect social conditions, agriculture, political economy, the fine arts, and even basic demographic trends. Only now are many of these themes being recovered… The early chroniclers of the Revolution began to lose some of the movement’s context even while quoting directly from its fundamental documents. They explained and defended the Revolution in terms essentially constitutional and political, as the triumph of liberty, equality, and limited government against the menace of irresponsible power and aristocratic privilege—rather feeble dangers, they somewhat paradoxically implied, if only by giving these challenges little real chance of success in America’s unique, libertarian environment, which they found at work in the very first settlements.”