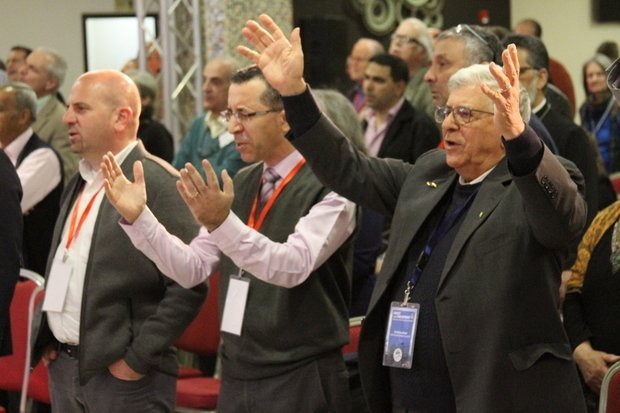 As evangelicals watch the dedication of the American embassy in Jerusalem and cheer, let’s not forget that there are evangelical brothers and sisters in the West Bank who are “defiantly Palestinian.”

Here is a taste of Dan Rabb’s piece at Religion News Service.  I also linked to this piece in my weekend tweetstorm.

And at the Baraka Church’s Sunday morning service, evidence of these efforts abounds. Scattered among the Palestinian worshippers are members of evangelical congregations in Nashville, Tenn.; Toronto; and New Jersey — easily identifiable by the black earpieces through which Danny Awad’s father translates the Arabic prayers into English. Special prayer books provide both English translation and transliteration of the Arabic so the North American guests can sing along. The service includes a popular American worship song, led by Awad’s 11-year-old nephew. The Americans sing along while the locals mostly clap their hands with the music.

Many visitors are surprised to find Christians practicing this kind of worship in the West Bank. Pastor Marty Duren of Nashville came to the Baraka Church with another American pastor who had developed a relationship with Awad.

“Palestinian Christians are just totally absent from American evangelical thought,” he says. “I can’t speak for everyone, but in my experience I think most don’t think about or know that there are Christians in the West Bank at all.”