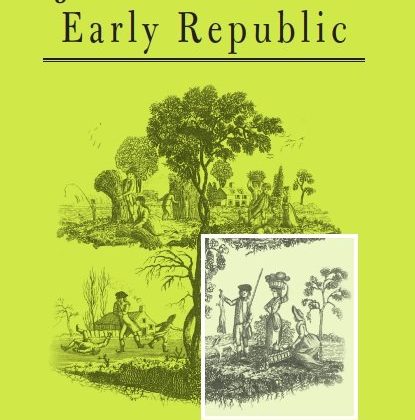 We are pleased to introduce the new co-editors of the Journal of the Early Republic, following the excellent leadership of retiring editor, Cathy Kelly. Andrew Shankman of Rutgers University-Camden and David Waldstreicher of the Graduate Center of the City University of New York will assume the editorship of the journal at the conclusion of SHEAR’s annual meeting in July 2018.

Andrew Shankman is a historian of the American Revolution and founding era, and author of Original Intents: Hamilton, Jefferson, Madison, and the American Founding (2017) and Crucible of American Democracy: The Struggle to Fuse Egalitarianism and Capitalism in Jeffersonian Pennsylvania (2004). He edited Anglicizing America: Empire, Revolution, Republic (2015) and The World of the Revolutionary American Republic: Land, Labor and the Conflict for a Continent (2014).

David Waldstreicher is a historian of early and nineteenth-century America, and author of Slavery’s Constitution: From Revolution to Ratification (2009); Runaway America: Benjamin Franklin, Slavery and the American Revolution (2004); and In the Midst of Perpetual Fetes: The Making of American Nationalism, 1776-1820 (1997). As editor, his books include A Companion to John Adams and John Quincy Adams (2013), A Companion to Benjamin Franklin (2011), and The Struggle Against Slavery: A History in Documents (2001). He also served as co-editor of the Journal of the Early Republic from 2013 to 2014.