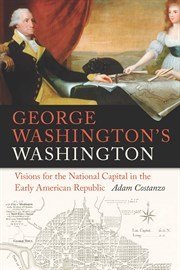 Adam Costanzo is Assistant Professor of History at Texas A&M University Corpus Christi. This interview is based on his new book, George Washington’s Washington: Visions for the National Capital in the Early American Republic (University of Georgia Press, 2018).

JF: What led you to write George Washington’s Washington: Visions for the National Capital in the Early American Republic?

AC: Initially, I envisioned the project as an examination of the relationship between the local residents of the District of Columbia and the federal government. Because the Constitution gives Congress exclusive control over the federal District, the capital has always had a very peculiar relationship with the federal government. As I began to explore the subject, however, I came to better understand the District’s place in national debates over political ideology. Eventually, it became clear that understanding the development of the city required understanding the visions for the nation, and for the city, put forward by the political leaders of the time. Thus, the book became an exploration of those visions for the national capital and the ways that they affected the growth of the city.

JF: In 2 sentences, what is the argument of George Washington’s Washington: Visions for the National Capital in the Early American Republic?

AC: Federal support for development of the national capital ebbed and flowed in connection with the ideological goals of those in power. George Washington’s vision for a grand national capital on the Potomac was supported (but largely bungled) by Federalists, systematically ignored by Jeffersonians, and with the help of locals who had served as caretakers for Washington’s vision revived by Jacksonians as they began to establish a continental American empire.

JF: Why do we need to read George Washington’s Washington: Visions for the National Capital in the Early American Republic?

AC: In cities and towns across the nation, the federal government might wield some influence. In the District of Columbia, it had complete control over the city. That fact made the capital a physical embodiment of the ideological goals of early republic politicians. Thomas Jefferson might have written glowing prose about yeoman farmers advancing his empire of liberty into the west, but he had very few ways to control the actual development of that region. In the District, he got to decide what streets to fund, what bridges to build, and, in one delightful example of micromanagement, how to properly secure the bars over the windows of the new city jail.

If you have interest in early republic politics, city planning, DC history, architecture, or any of the ways that our built environment both reflects and affects the goals we have for our cities and our nation, you’ll need to read George Washington’s Washington.

AC: As an undergraduate in the post-Cold War 1990s, I studied International Relations and Russian Studies. While, these studies allowed me to study abroad and then briefly to live abroad after college, I eventually realized that what I had liked most about my IR courses was learning the history of the places and people I was studying. I decided to leave behind Russian Studies and take up American history for graduate school because I had learned enough Russian history by that point to see that it is almost unceasingly depressing. I settled on a specialty in early republic America in part because Americans at the time held out great hopefulness for the future despite the rapidly changing world around them.

AC: Right now, I’m working on turning the ideas and issues from George Washington’s Washington into a Reacting to the Past learning experience for the classroom. In a long-form Reacting game, students would be assigned characters from the history of early Washington such as local landowners, land speculators, city commissioners, or national politicians. Through a series of in-class activities, they’d work their own way through complicated questions like, what should the capital city look like, what should it mean to the nation, how should its plan reflect their political goals, how should construction of the city be funded, and what responsibility should the federal government have for the city itself. I think the subject matter offers not only room for students to engage in historical research and debate but also an opportunity to introduce the notion that the built environment around them carries meaning and has an effect on their lives.