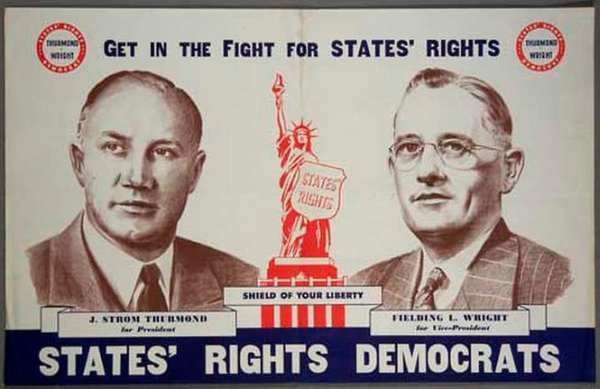 By the way, if you want to learn more about Kruse and the way he has used twitter to teach us how the past informs the present, listen to our interview with him in Episode 34 of The Way of Improvement Leads Home Podcast.

So I think I broke Twitter. Um … my bad?

Read the thread here.   A taste:

Since @kanyewest‘s tweets have apparently made this topic unavoidable, some thoughts on the history of the parties’ switch on civil rights.First, it’s important to note that, yes, the Democrats were indeed the party of slavery and, in the early 20th century, the party of segregation, too.(There are some pundits who claim this is some secret they’ve uncovered, but it’s long been front & center in any US history.)Indeed, as @rauchway once noted, one could argue that *the* central story of twentieth-century American political history is basically the evolution of the Democratic Party from the party of Jim Crow to the party of civil rights.At the start of the 20th century, the Democrats — dominated by white southern conservatives — were clearly the party of segregationists.President Woodrow Wilson, for instance, instituted segregation in Washington and across the federal government. (See @EricSYellin‘s work.)That said, both parties in this period had their share of racists in their ranks.When the second KKK rose to power in the 1920s, it had a strong Democratic ties in some states; strong GOP ones elsewhere.Read the rest here.