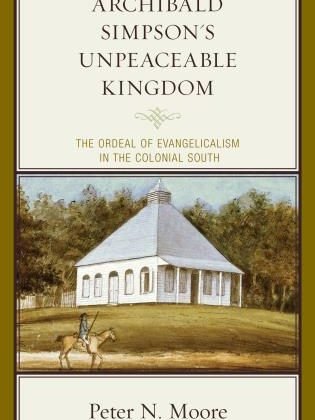 Peter Moore is Professor of History at Texas A&M University-Corpus Christi. This interview is based on his new book, Archibald Simpson’s Unpeaceable Kingdom: The Ordeal of Evangelicalism in the Colonial South (Lexington Books, 2018).

JF: What led you to write Archibald Simpson’s Unpeaceable Kingdom: The Ordeal of Evangelicalism in the Colonial South?

PM: When I was a graduate student in the early stages of doing research on what would eventually become my dissertation/first book, I was exploring the mysterious death of William Richardson, an evangelical Presbyterian minister in backcountry South Carolina who had either (depending on the source) hanged himself, been murdered by an enemy, or died at his devotions. There was an account of his death in the diary of his coreligionist and close friend Archibald Simpson, which I found on microfilm in the wonderful archive of the now shuttered Presbyterian Historical Society in Montreat. The diary was not, to say the least, reader-friendly, but it seemed to have a lot of rich material for the social and religious history of the colonial lowcountry. So when I finished the first book, I decided to transcribe and edit Simpson’s diary, parts of which I published in 2012. The diary turned out to be even more amazing as a source than I could have imagined back in 1999, and since I was already so deep into the project, writing a cultural biography of Simpson was a logical next step.

JF: In 2 sentences, what is the argument of Archibald Simpson’s Unpeaceable Kingdom: The Ordeal of Evangelicalism in the Colonial South?

PM: Evangelicals met with fierce opposition from all directions as they tried to impose an evangelical order on churches and communities in the late-colonial southern lowcountry. Despite the great midcentury revivals, the steady stream of religious dissenters who poured into the region, and all the noise evangelicals made about slave conversions, Simpson’s story suggests that there was no evangelical movement in colonial South Carolina, just a frustrating evangelical slog.

JF: Why do we need to read Archibald Simpson’s Unpeaceable Kingdom: The Ordeal of Evangelicalism in the Colonial South?

PM: This book is a microhistory of transatlantic evangelicalism. Although the heart of the argument deals with the colonial south, four of the ten chapters are set in southwestern Scotland, where Simpson grew up and where he died in 1795. Aside from engaging the debate over the significance of evangelicalism in the pre-Revolutionary American south, the book explores evangelicals’ inner world and the boundaries of religious experience, the really important role of pastoral care in building evangelicals’ credibility, the complicated relationship between evangelicals, slavery, and slaves, and the impact of the Revolutionary War on transatlantic communities, among other things. As a biography it treats these issues in an interesting narrative format. I should add that Simpson’s dour Presbyterian exterior masked his intense emotions, his sorrows and insecurities, and his rich inner life, all of which he poured into his diary. It was both challenging and fun to bring these out in the book, especially in the chapters on courtship and marriage (he was a really bad suitor) and when he runs away from George Whitefield’s orphanage.

PM: I was not a history major as an undergraduate, and when I made my first attempt at graduate school I studied religion, not history, at Vanderbilt University. One of my first classes was Jack Fitzmier’s seminar on Puritanism, which opened my eyes to the possibilities of religious history and the way it intersected with society, ideas, politics, culture, and psychology. While there I was also fortunate to be able to take two courses on Southern history from David Carleton in Vanderbilt’s history department, and I was hooked. I dropped out of the program, but when I grew up a bit more and returned to graduate school later at the University of Georgia, I was all about southern religious history. At a more personal level, my research projects have also been something of an exercise in working out questions about my own identity as a southerner, spirituality as a Christian, and notions of community and belonging.

PM: I am in the early stages of research on the failed attempt by Scottish Covenanters to plant a colony (Stuarts Town) in South Carolina in the mid-1680s. Some of this is familiar ground — Presbyterianism, religious history, colonial South Carolina — but much of it is new, a bit intimidating, and very exciting because it brings me into the seventeenth century, the Spanish borderlands, and Indian history.