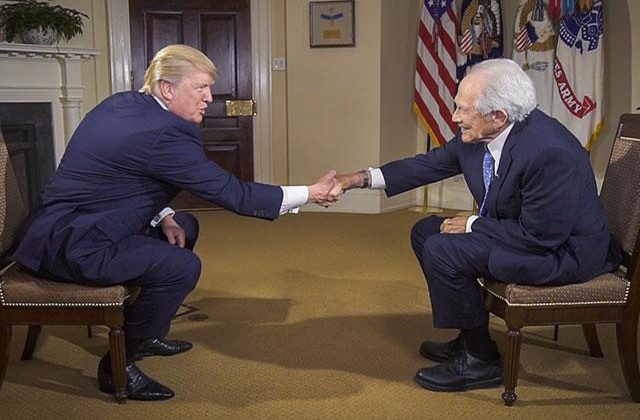 Ruth Graham has a great piece at Politico Magazine on the love affair between Donald Trump and Christian broadcasting.  Here is a taste:

When “Huckabee” made its debut on TBN last fall, it immediately became the network’s highest-rated show, with more than a million viewers for a typical episode. Unlike every other show the network has produced, it is overtly political and squarely focused on current events. It has a variety component, with musical guests and comedians, and Huckabee occasionally breaks out his own bass guitar on stage. But in its six months on the air, Huckabee has also interviewed Israeli Prime Minister Benjamin Netanyahu, Trump-defending Texas Attorney General Ken Paxton, anti-abortion activist Serrin Foster and former Senator Joe Lieberman. The very first guest on his very first show, last October, was President Trump.

A generation ago—even a few years ago—this would have been unthinkable. Christian TV was largely the province of preachers, musicians, faith healers and a series of televangelism scandals. Politicians were leery of getting too close. To establishment evangelicals, not to mention the rest of America, Christian TV was hokey at best, and disreputable at worst.

But in the past two years, largely out of view of the coastal media and the Washington establishment, a transformation has taken place. As Christian networks have become more comfortable with politics, the Trump administration has turned them into a new pipeline for its message. Trump has forged a particularly tight marriage of convenience with Pat Robertson’s Christian Broadcasting Network, which since early in the 2016 campaign has offered consistent friendly coverage and been granted remarkable access in return. Trump personally has appeared 11 times on CBN since his campaign began; in 2017 alone, he gave more interviews to CBN than to CNN, ABC or CBS. Trump’s Cabinet members, staffers and surrogates also appear regularly. TBN has embraced politics more gingerly—it is still not a news-gathering organization—but Trump has made inroads there, too, starting with his kickoff interview on “Huckabee.”

Donald Trump, a politician, is now shaping the agenda of conservative evangelical television.  Another example of how politics and culture influence and shape the character American evangelicalism.  Trump should be getting credit as an unofficial producer for these shows.