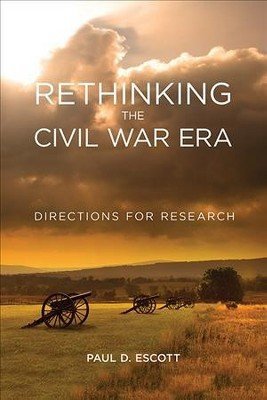 Paul Escott is Reynolds Professor of History at Wake Forest University. This interview is based on his new book, Rethinking the Civil War Era: Directions for Research (The University Press of Kentucky, 2018).

JF: What led you to write Rethinking the Civil War Era?

PE: I was invited to take on this project by the editors of the New Directions in Southern History series at the University Press of Kentucky. As part of the invitation we agreed that this book would have a slightly different format. Instead of writing in an entirely historiographical style, I have used a more personal tone and have thought of each chapter as an essay focused on both the extant scholarship and on questions or interpretive issues that interest or puzzle me.

Frankly, writing this book was not something I had ever imagined myself doing, and the challenge was more than a little intimidating. There are a great many very talented and energetic historians working in the field of the Civil War Era, and to master all the important and recent work is virtually impossible. I have read as widely as possible, within the practical constraints of producing a book within some reasonable period, and I have tried to comment on important new directions or possibilities for research. In the Preface I comment on the immense talent at work in this area and apologize that I could not cite all the deserving recent studies.

JF: In 2 sentences, what is the argument of Rethinking the Civil War Era?

PE: This book identifies important questions, issues, and new directions of research in the Civil War Era. Its chapters cover the roots of war, the challenges to wartime societies North and South, the war’s consequences, and important work or questions in African American history, military history, environmental history, and digital research.

JF: Why do we need to read Rethinking the Civil War Era?

PE: The Press and I hope that this book will be useful both to established scholars and to younger historians who may want to survey opportunities in the field and target their own work. Books such as this one often serve a purpose in a rapidly developing field.

PE: I was in college during the Civil Rights Movement, and the stirring events of that era naturally stimulated one’s curiosity about the roots of our nation’s racial problems. As a result, I entered graduate school eager to learn more about southern history and the era of the Civil War. I was extremely fortunate to have outstanding professors and mentors at Duke University, namely Robert F. Durden and Raymond Gavins.

PE: After many years of focusing on the South and the Confederacy, I more recently shifted my attention to the North. I now am working on a study of racism and racial attitudes in the North during the Civil War.