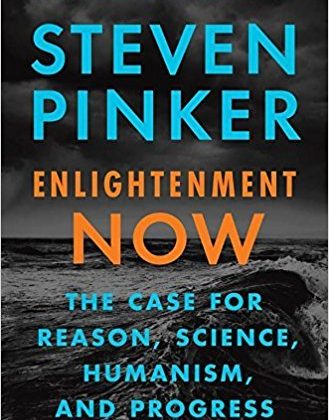 Over at Inside Higher Ed Michael Roth, the president of Wesleyan University and a strong defender of humanities and the liberal arts, reviews Steven Pinker’s Enlightenment Now: The Case for Reason, Science, Humanism, and Progress.

In his new book, Enlightenment Now: The Case for Reason, Science, Humanism and Progress, Pinker expands his purview to include progress in everything from access to basic nourishment and health care to income and increased choices in how we spend our time. In every important area, Pinker sees robust improvement. The world is getting safer, more prosperous and less authoritarian. “Look at the data!” he cries again and again, and you will see that human beings have much to cheer about and much to look forward to. Evidence from surveys even suggests that we are happier — although not nearly as happy as we should be, given the progress we’ve made.

Pinker himself is not happy with colleges and universities, especially humanities programs, which, he claims, tend to emphasize the tragic, the negative, even the apocalyptic. He takes particular aim at Nietzsche and the streams of critical theory that flow from his thinking. Nietzsche’s antimodern polemics against smug, middle-class complacency especially rankle the Harvard University professor who can’t seem to imagine why anyone wouldn’t be grateful for the greater access to food, shelter and leisure that modernity has created.

There is plenty to criticize in Pinker’s historical portrait of triumphant modernity. He ignores any part of the Enlightenment legacy that doesn’t fit neatly into his neat, Popperian understanding of how scientific progress is made through disconfirming hypotheses. In describing progress in societies that behave more rationally, he says almost nothing about the social movements and struggles that forced those with power (and claims to rationality) to pay attention to political claims for justice. When science leads to bad things, like eugenics, he just dismisses the results as bad science. He criticizes those with whom he disagrees as being narrow-minded or tribalistic, but he seems to have no self-awareness of how his own thinking is plagued by parochialism. He writes that we have to cure “identity protective cognition,” but for him history is an effort to find figures like himself in the past so that he can write a story that culminates with people who have the same views as he. “There can be no question of which was the greatest era for human culture; the answer has to be today.” Maybe he thinks that the gesture of expecting an even better future is an expression of intellectual modesty.

But as much as Pinker’s self-congratulation may annoy anyone concerned with (or just curious about) the ways the achievements of modernity have been built through oppression, exploitation and violence, it would be a mistake to ignore the extraordinary accomplishments that he documents in Enlightenment Now. Take the astonishing reductions in poverty around the world. Over the last century, the portion of people living in extreme poverty has been reduced from 90 percent to under 10 percent. The acceleration of this progress in the last half century has been truly remarkable, and we can see similar good news in regard to decreased child mortality and increased life expectancy (to pick just two of the subjects Pinker covers).

And Pinker is right that many of us in the humanities and interpretive social sciences are loath simply to celebrate such gains when discussing the legacies of the Enlightenment or embracing contemporary critical thinking. Why? Part of the reason is that the story of those achievements should not be divorced from an account of how social injustice has made them possible. Humanists don’t dismiss the importance of reductions in poverty, but neither do they simply want to describe slavery, colonialism and other forms of exploitation as the price one has (always?) to pay for progress.