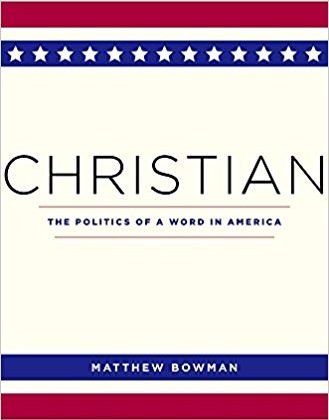 Matthew Bowman is associate professor of history at Henderson State University. This interview is based on his new book, Christian: The Politics of a Word in America  (Harvard University Press, 2018).

JF: What led you to write Christian: The Politics of a Word in America?

MB: I wrote the book because of Anne Rice, if you can believe it; she wrote a piece a few years back in which she announced that though she considered herself a follower of Jesus, she did not want to be called a “Christian” because it was commonly understood that Christians were anti- any number of things: women, Democrats, LGBT people, and so on. This struck me as fascinating, because I didn’t think she was alone: a lot of people seem to have come to similar conclusions in the past twenty years, and a wide range of surveys bear that out. Why is it, I wondered, that the Religious Right and millennials who leave Christian churches over their social politics have essentially come to an agreement that “Christianity” is about social conservatism?

JF: In 2 sentences, what is the argument of Christian: The Politics of a Word in America?

MB: The book looks at the ways the word “Christian” has been used in American politics since the end of the Civil War, and particularly follows the process by which white Protestants in particular have come to identify Christianity with something called “Western civilization” as defined in the twentieth century, a fascinating story that involves war, Cold War, psychology, and children’s textbooks. It’s that link, I think, that has allowed the Religious Right to identify the religion with traditionalist social politics, although I also explore a great number of dissenting voices, and point out ultimately that “Christian” is an essentially contested concept, one which might be best defined as a collection of concepts and ideas that can be marshalled to serve any number of definitions, theologies, or social orders.

JF: Why do we need to read Christian: The Politics of a Word in America?

MB: I think this sort of book is essential these days both for historical reasons but also contemporary politics. Of course it’s desirable to have a nuanced and detailed understanding of the American past, but I think questions like those this book raises also show how that understanding can serve a social and civic function: most people seem to agree that the polarization taking hold of American politics and culture these days is a bad thing, and one of the things I hope this book does is show that the history of American Christianity is profoundly resistant to that sort of polarization.

MB: Like many past Author’s Corner authors, in college I found myself deeply confused about the culture and society I found myself in and was relieved, genuinely, when history I began reading helped explain it to me. I was a librarian in college, and sometimes my supervisor would find me kneeling in the stacks next to a cart of books thumbing through one or another; this, actually, is how I discovered Ann Braude’s Radical Spirits, one of the first monographs I ever read.

MB: I’m working on a cultural history of Betty and Barney Hill, the first people in the United States to claim abduction by a UFO, in the sense that we define “abduction” today: little gray men, profound trauma, lost time, medical probing, and so on. The Hills are interesting in their own right: when they were abducted in 1961, they were an interracial couple, practicing Unitarians, and civil rights activists, and all these identities intersected uncomfortably with their new status of “abductees.” I think this story will tell us a lot about race, sexuality, and the rise of the New Age movement in the United States.