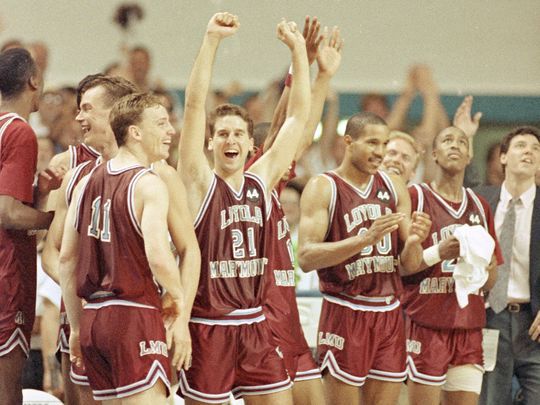 Paul Moses, writing at Commonweal, argues that Catholic college basketball teams are so good because they focus on teamwork rooted in “some important, Scripture-based principles of Catholic social teaching: community, the common good, and solidarity.”

I appreciate Moses’s analysis and I have definitely seen this ethic at work at Catholic colleges and high schools.  But I am also wondering just how much Catholic social teaching finds its way into big-time college basketball.  Has Villanova been successful because they are Catholic?  What about Georgetown in the John Thompson-Patrick Ewing era?  How about Gonzaga?  Marquette under Al McGuire?  Seton Hall under P.J. Carlesimo?

And what about John Wooden’s non-Catholic UCLA teams?  It seems they embodied the spirit of community, the common good, and solidarity more than most.

Maybe Catholic schools like Villanova or Georgetown win national championships because they have the best talent that particular year.

Here is a taste of Moses’s piece:

That is, Villanova recruits team players who have the grit and talent to win—and who will be less likely to leave early to cash in by playing professionally.

Is it churlish in this triumphant moment to note that there are spiritual pitfalls to winning? Scripture does make clear how hollow and transient earthly honors are. And if a one-for-all team spirit leads to an ethic of winning at any cost—of turning a blind eye to cheating or other wrongdoing—that would be hypocritical. This point is made—with devastating effect, in my opinion—in a play I saw on Broadway not long after I graduated from high school, Jason Miller’s That Championship Season, winner of the 1973 Pulitzer Prize in Drama. It’s about the 20-year reunion of a championship Catholic high school basketball team. (There is also a 1982 film that doesn’t really do justice to the play.)

Villanova is, after all, a school in the Augustinian tradition. And who was more restless with wordly success than St. Augustine? His Confessions includes regrets about his youthful love of sport: He flouted his parents’ admonition to study “because I loved playing; I loved feeling proud when I won.”

But perhaps we can also extract some winning advice for a college basketball team from Augustine and his Confessions: “Vain-glory is the highest danger.”