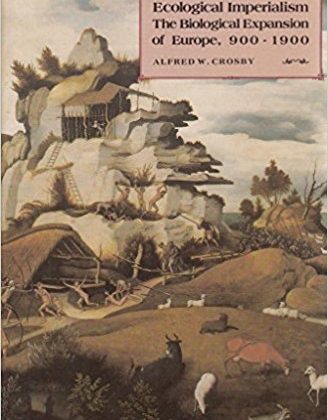 I just learned about this today.  Crosby’s Ecological Imperialism: The Biological Expansion of Europe, 900-1900 was one of the first books I read in graduate school.  Later I read The Columbian Exchange.  Crosby‘s work continues to inform many of my lectures, both in my U.S. Survey Course and my Colonial America course.  He was such an innovative thinker.

Here is a taste of the New York Times obituary:

In the eyes of many of his peers, Alfred W. Crosby was the father of environmental history, and he owed that distinction in large part to his childhood infatuation with Christopher Columbus. He revered him as much as he did his comic strip hero Superman.

That fascination led him, as a scholar, to delve into the biological and cultural impact of Columbus’s voyages to the Americas. And to purse that investigation he expanded the historian’s toolkit.

In groundbreaking feats of interdisciplinary research, he incorporated studies of biology, ecology, geography and other sciences in his efforts to chronicle and understand human events — work that introduced sweeping explanatory concepts like “the Columbian Exchange” and “ecological imperialism.”