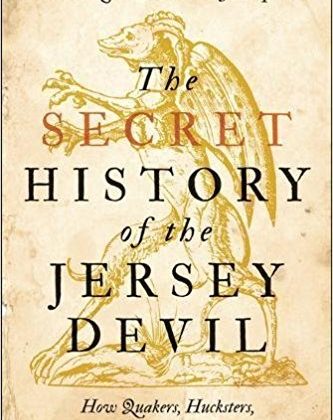 Brian Regal is associate professor of the History of Science, Technology, and Medicine at Kean University. This interview is based on his new book co-authored with Frank Esposito, The Secret History of the Jersey Devil: How Quakers, Hucksters, and Benjamin Franklin Created a Monster (Johns Hopkins University Press, 2018).

JF: What led you to write The Secret History of the Jersey Devil?

BR: Following Hurricane Sandy we lost power for over a week. When it came back on, I had a lot of TV watching to catch up on. One of the first things I saw was a show on monsters that was doing a segment on the Jersey Devil. It recycled all the old unsubstantiated clichés and nonsense about witches and bat wings. I began looking into the literature on the subject and realized it too was all crap. No one had ever bothered to do a scholarly investigation into the myth or its origins. It made me mad how lazy and slipshod so much of cryptozoological writing was (anger is one of the underappreciated catalysts to historical writing). I told all this to my Kean University colleague, and former teacher, Dr. Frank J. Esposito, a scholar of New Jersey and Native American history. We immediately decided we should write something together on the legend. That is how this book was born. We wanted to do something that had rarely been done before: approach a monster legend from a historical rather than a sociological or folklorist or biological angle. We went and found a large number of primary sources that had never been tapped or never used for what we used them for. I wanted to write something that might one day be thought of as a compelling narrative and that was sympathetic to the lead character, and maybe even a little poetic with a nice turn of phrase or two (I understand someone else will make that determination).

JF: In 2 sentences, what is the argument of The Secret History of the Jersey Devil?

BR: The story of the Jersey Devil is not one of a monster born of a witch mother. It’s the story of religious strife, bare-knuckled political in-fighting, and cultural scapegoating.

JF: Why do we need to read The Secret History of the Jersey Devil?

BR: No one really needs this: it’s not insulin. It would, however, be of interest to anyone interested in some of the little discussed cultural events that had a major, but unappreciated impact upon American history. If you are interested in where political monsters come from, the treatment of outspoken women, religious intolerance, and the origins of what we today call ‘Fake News’ than you should read it. The story centers on the life of Daniel Leeds, a man largely forgotten today, but who, had he lived a generation later, we might have called a Founding Father. A man who tried to bring the Scientific Revolution to North America; who became the first author in New Jersey and one of the first censored authors in America; and who helped invent the political attack literature that has become a part of modern society. We also placed the origins of the legend within western monster lore and how other such myths contributed to it.

BR: When I was a kid I wanted to be Jonny Quest. He travelled the world having adventures, he was smart, and he wore a cool, black t-shirt. I wanted to be Jonny, but as an historian. My guidance counselor, however, told me “kids like you don’t go to college” (My father was a construction worker and my mother was a waitress). So, I joined the army after high school. I volunteered for service in the armored cavalry and travelled the world on Uncle Sam’s dime. I kept reading and dreaming and later was fortunate enough to encounter people who helped me get into college and who supported my plans, and I began to think I might just be able to be an historian and a writer after all. I was especially fascinated by the history of science and the relationship between professional scholars and amateur investigators, particularly in the realm of the paranormal and monster studies, and realized there had not been that much done on this topic. I hope that if I ever do meet Jonny, he’ll understand.

BR: I am currently working on a history of amateur archaeology examining the various legends and myths about who ‘really’ discovered America. I am looking at stories about a Welsh Prince, Vikings, Chinese explorers, African adventurers, and others, and how these stories are largely the result of political and cultural wants and needs rather than any actual archaeological or historical realities, and that are tied to their historical times. It is tentatively titled Waiting for Columbus.