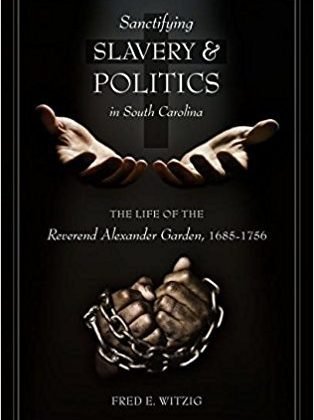 Fred Witzig is Professor of History at Monmouth College. This interview is based on his new book, Sanctifying Slavery and Politics in South Carolina: The Life of Alexander Garden (University of South Carolina Press, 2018).

JF: What led you to write Sanctifying Slavery and Politics in South Carolina: The Life of Alexander Garden?

FW: I was introduced to Alexander Garden by George Whitefield. My interest in Whitefield and the Great Awakening began when I was an undergraduate and never ended. But I quickly noticed that while the scholarship on Whitefield is lively and expansive, historians had never even begun to adequately assess the enormous efforts of clergy who worked against him. Foremost among them were New England Congregationalist Charles Chauncy and the commissary of the Church of England in the Carolinas, Alexander Garden. Chauncy largely failed in his efforts against the Awakening, and he’s famous among historians today. Garden went after Whitefield with more creativity and energy than Chauncy did, and, impressively, he succeeded in squelching the Awakening in South Carolina. More broadly, Garden arrived in South Carolina at a seminal moment in its development; in the aftermath of the Yamasee War, the white colonists shifted the economic foundations of their colony squarely onto African slave labor. Garden lent his considerable leadership skills to this endeavor, and in the process made a place for the Church of England, and Christianity in general, in the South that would last for more than a century. Yet, historians sometimes confuse him with the botanist Alexander Garden, and his only biography—until now!—is an unpublished dissertation from almost forty years ago. I think it’s time he gets his due.

JF: In 2 sentences, what is the argument of Sanctifying Slavery and Politics in South Carolina: The Life of Alexander Garden?

FW: Alexander Garden marshalled the resources of the Church of England in support of the burgeoning slave plantation economy of early South Carolina and applied a veneer of spiritual respectability to carnal exploitations of slave labor. In the process, Garden smothered the fires of a more egalitarian evangelical revivalism, burdened possibilities for the amelioration of the conditions of slavery with a Christianized paternalism that prevailed until the Civil War, and made the Church of England in the colony more influential than ever before.

JF: Why do we need to read Sanctifying Slavery and Politics in South Carolina: The Life of Alexander Garden?

FW: Are you interested in the long and sometimes sordid history of the entanglement of Christianity and slavery in North America; the history of the Christian Church, and especially the Church of England, in the South; the development of the southern social order that prevailed at least until the Civil War; the early efforts to educate and evangelize slaves (Garden founded the continent’s first major slave school); the reasons why the Great Awakening flourished and then died out in the Carolinas and Georgia; and the way non-evangelical colonial leaders challenged and shaped George Whitefield’s evangelical ministry? If you are, this is your book. I wrote it with undergraduates in mind, as well, so that faculty teaching courses on Southern history, evangelicalism, slavery, and other such topics could assign it to their students. In the preface I call it a dual biography: the story of the tragic but productive relationship between a refugee from Scotland and his colony on the edge of the British Empire.

FW: Two events stand out. The first was when I visited Appomattox Courthouse with my family when I was probably seven years old. Standing outside on the rutted road there in Virginia, my dad told in dramatic fashion the story of General Grant’s meeting with General Lee, and then Lee’s surrender of his troops in the next couple of days. I knew then that history was the most fascinating subject anyone could ever study. The second event was when I was twenty-six and decided to change careers and become a teacher. What else would I ever want to teach?

FW: I’ve had a strong interest in public history for . . . years. Recently I started two websites. One is an attempt to reach smart but non-expert adults with thoughtful histories of the United States, the church at large, and a smattering of other topics. Eventually it will host resources for homeschooling high schoolers who, in my view, are at the moment stuck with a choice between ultra-nationalist Christian histories or secular histories that ignore or denigrate religious impulses in America and the world. The second website, not yet public, will host podcasts of conversations between me and a historian friend talking about Christians of the past whose stories can challenge us to evaluate current American evangelical assumptions.