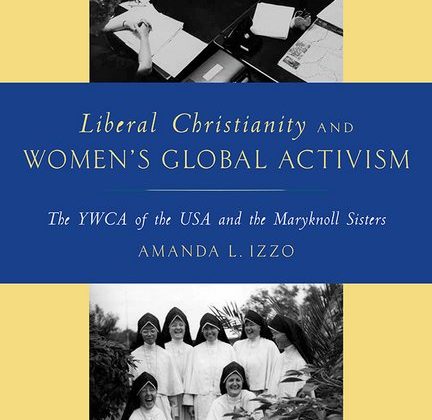 Amanda Izzo is an assistant professor in the Department of Women’s and Gender Studies at Saint Louis University. This interview is based on her new book, Liberal Christianity and Women’s Global Activism: The YWCA of the USA and the Maryknoll Sisters (Rutgers University Press, 2018).

JF: What led you to write Liberal Christianity and Women’s Global Activism: The YWCA of the USA and the Maryknoll Sisters?

AI: I was inspired to start the project while I was an employee of the Sophia Smith Collection, a women’s history archive at Smith College. This immersed me in the world of the Young Women’s Christian Association (YWCA) and the Maryknoll Sisters, the two faith groups I examine in this book. Preparing manuscript collections—including packing hundreds of boxes in the YWCA’s Empire State Building headquarters—was a revelation. I had a unique vantage point on a stirring history of women’s activist faith that begged to be told.

JF: In 2 sentences, what is the argument of Liberal Christianity and Women’s Global Activism: The YWCA of the USA and the Maryknoll Sisters?

AI: Liberal Christianity and Women’s Global Activism argues that the YWCA and Maryknoll Sisters put an activist Christianity into motion in the twentieth century by creating bridges between grassroots interpersonal encounters and social movements that were both local and global in scope. Their efforts left a significant imprint on the labor, civil rights, and global human rights movements

JF: Why do we need to read Liberal Christianity and Women’s Global Activism: The YWCA of the USA and the Maryknoll Sisters?

AI: I think the book is a necessary corrective to historiographic and popular perceptions that religious activism has, since the mid-twentieth century, been the exclusive province of conservative Christians and that the most instrumental actors in religious life are men. This work also offers new frameworks for interpreting U.S. political history. These frameworks connect foreign mission to the global human rights movement, red scares to women’s activism, and Christianity to feminism. Liberal Christianity remains a vital presence in U.S. political life; this book, in some part, attempts to explain why this fact has become obscured.

AI: This, too, goes back to the archives. Arranging material gives such intimacy with the past, it is as though I felt a call to share these stories. I have been fortunate to work in interdisciplinary settings—my training is in American Studies and my faculty appointment is in Women’s and Gender Studies—that have enabled me to emphasize how the study of the past can help us to understand the present.

AI: I’m in the very beginning stages of a project looking at women’s religious activism in twentieth century Saint Louis. Religious groups in this city have been at the forefront of so many mobilizations: from disability rights to fair housing and from refugee resettlement to queer liberation, to name a few. While my recently published book highlights the global reach and ambitions of movements often thought to operate solely in local or national contexts, this new project does the reverse. It attempts to unearth how activist religious projects of national or international scope shaped grassroots politics and faith communities in a single metropolitan locale.