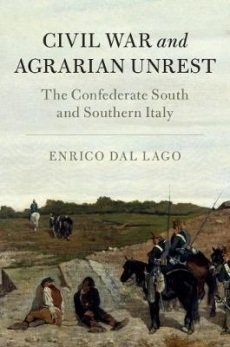 Enrico Dal Lago is Professor of American History at National University of Ireland Galway. This interview is based on his new book, Civil War and Agrarian Unrest: The Confederate South and Southern Italy (Cambridge University Press, 2018).

JF: What led you to write Civil War and Agrarian Unrest: The Confederate South and Southern Italy?

EDL: I was always fascinated by the historical parallelisms between the United States and Italy in terms of having a comparable past of difference and conflict between the north and the south of the country. My first book – Agrarian Elites: American Slaveholders and Southern Italian Landowners, 1815-1861 (LSU Press, 2005) – was a comparison between the propertied classes of the two southern regions of the United States and Italy, and other scholars, notably Don Doyle, have also written about parallelisms between the U.S. South and southern Italy. However, no scholar had ever written a comparative study of the civil wars that the conflict between north and south caused in the United States and Italy in the same years in the mid-nineteenth century. In 1861-65, contemporaneous to the American Civil War, fought between a northern-based Union and a southern-based Confederacy, a civil war was also fought in southern Italy, largely between northern and southern Italians. My book is the first comparative study of these two civil wars. I felt that it was an important gap in the comparative scholarship on the United States and Italy that needed to be filled in order to acquire an in-depth understanding of the significance of the parallelisms represented by the north vs. south conflict in the two countries. The importance of these parallelisms is further confirmed by the fact that, in both the United States and Italy, the long-term legacy of the outcome of the civil war – which, in both cases, led to a fracture and then a reconciliation between the northern and southern parts of the country – is still very much present and has witnessed a surge in national interest since the parallel commemorations of the 150 years from the start of the American Civil War and from Italian national unification, in 2011.

JF: In 2 sentences, what is the argument of Civil War and Agrarian Unrest: The Confederate South and Southern Italy?

EDL: My book argues that the two parallel civil wars in the United States and Italy in 1861-65 had comparable origins in attempts by two regional propertied elites to be instrumental in the creation of two new nations – the Confederate States of America and the Kingdom of Italy – which protected their interests at the expense of the majority of the two southern populations. The resistance to Confederate authority, carried out in the Confederate South by large numbers of Unionists, and especially by African American slaves, and the parallel and contemporaneous resistance carried out by large number of peasants and soldiers attached to the former Bourbon dynasty in southern Italy produced two parallel “inner civil wars” in the two southern regions, and eventually resulted in the collapse on the Confederacy and in the near collapse of the Italian Kingdom, and also in a temporary loss of power for the two regional elites.

JF: Why do we need to read Civil War and Agrarian Unrest: The Confederate South and Southern Italy?

EDL: Not only my book is the first comparative study of the American and Italian civil wars of 1861-65; it is also the first comparative study that builds upon the most recent scholarly tendencies of focusing on the Confederate South’s “inner civil war” to argue that comparable “inner civil wars” occurred, as happened in Italy, wherever a process of forcible nation-building from above took place during the course of the nineteenth century. Inevitably, the outcome of this process could only be either the complete collapse or the near collapse of the new nation, as the examples of the Confederacy and of the Italian Kingdom clearly show. Crucially, for the majorities of the two groups of southern agrarian workers – African American slaves and landless southern Italian peasants – who were in conditions of dependency from masters and landlords, the “inner civil wars” in the Confederate South and southern Italy represented major opportunities to strike at their oppressors, by allying with anti-Confederate Unionists in one case and with the anti-Italian pro-Bourbon forces in the other case, and with the two primary and distinct, but parallel and comparable, objectives of acquiring legal emancipation and economic independence. My book shows, though, that, ultimately, complete freedom was indissolubly tied, for both African American slaves and southern Italian peasants, to ownership of land. My book shows also that this aspiration, common to all nineteenth-century agrarian workers, was frustrated in both cases, leading to continuous conditions of dependency for the African American freedpeople and the southern Italian peasants, and, also in both cases, these conditions lasted until long after the end of the two civil wars.

EDL: The long-term origins of my fascination with American History have a lot to do with the many American movies – starting from Gone with the Wind – and American TV Series – among which Roots and North and South – I watched in Italy, where I was born and I spent the first twenty-five years of my life. The actual decision to become an American historian, though, came somewhat later, during the course of my postgraduate studies, when I became progressively aware of the historical parallelisms between the United States and Italy to which I referred earlier with regard to the conflictual relationship between the north and the south of the two countries. As a result of this growing awareness, I thought that I could understand better the significance of these parallelisms if I studied in depth the history of the United States in the Civil War era, and this eventually became my main field of research.

EDL: I am planning to write a follow-up comparative study which will focus on the aftermath of the two parallel civil wars in the U.S. South and southern Italy. In my comparison, I will look specifically at the extent of continuity vs. change with regards to labor relations in the agrarian countryside. I am especially interested in the rise of illegal, and in one case paramilitary, forms of agrarian violence as tools for the protection of the interests of the agrarian elites – i.e., the former southern slaveholders and the southern Italian landowners – and as a means to keep the agrarian workers – i.e., the African American freedpeople and the southern Italian peasants – in continuous states of subjection in the Reconstruction U.S. South and southern Italy after 1865.