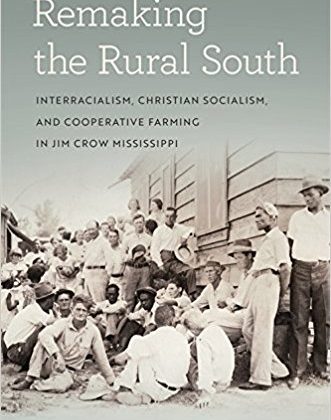 Robert Ferguson is Assistant Professor of History at Western Carolina University. This interview is based on his new book, Remaking the Rural South: Interracialism, Christian Socialism, and Cooperative Farming in Jim Crow Mississippi (University of Georgia Press, 2018).

JF: What led you to write Remaking the Rural South?

RF: This book was adapted from a dissertation I wrote while a graduate student at the University of North Carolina at Chapel Hill. I knew when I arrived to UNC that I wanted to research race relations in the rural South. After discussing ideas with my advisor, Fitzhugh Brundage, he suggested that I meet with the archivists at the Southern Historical Collection which housed on UNC’s campus. When I told them my very general and undeveloped plans for a dissertation, they showed me the 11.5 linear feet of documents they had pertaining to two intentional, interracial communities in rural Mississippi at the height of the Jim Crow era. I was hooked. Thank goodness for archivists!

JF: In 2 sentences, what is the argument of Remaking the Rural South?

RF: Focusing on two interracial, Christian socialist communities in the rural South, the book argues that former sharecroppers and their allies enacted significant cultural shifts that placed their communities in the vanguard of human rights struggles in the 1930s to the 1950s. From the Great Depression to the civil rights movement, residents of Delta Cooperative Farm and Providence Farm acted out moments of modification that created egalitarian, democratic communities and which were ultimately quashed by white massive resistance to the black freedom struggle.

JF: Why do we need to read Remaking the Rural South?

RF: In times of national polarization, history doesn’t have to be a weight that paralyzes us. We should never look at the world and say, “well, it’s always been that way” and then go about our days weighted down by an ahistorical, erroneous understanding of the past while doing nothing about the present. Rather, history can liberate us when we understand that in the face of overwhelming hardships—such as, say, the Great Depression or Jim Crow—historical actors have posed radical changes and set about achieving those changes.

RF: My father and grandmother were high school history teachers. I grew up in a house where the past was part of our daily conversations. We loved good stories. We especially loved uplifting stories. And while the past is full of astonishing tragedy, it can also be the source of inspiration. By the time I was a teenager, I was already reading about the civil rights movement and other minority freedom struggles that allowed me to imagine alternatives to the sometimes problematic race relations I witnessed growing up. Even now, as a historian, writer, and teacher, I seek out the stories of everyday Americans who have struggled against the status quo. If my readers and students find some inspiration there, all the better.

RF: I’m currently working on an environmental and economic history of how the boom and eventual bust of twentieth century industries have lead to a new era in southern history. In particular, by looking at industries that have relied on harnessing water – textiles, energy, and beer – I argue that while most of the twentieth century experienced almost unfettered industrial growth, since the 1970s many small towns across the region have begun to resemble the Rust Belt rather than the Sunbelt, complete with environmental degradation and economic decline.