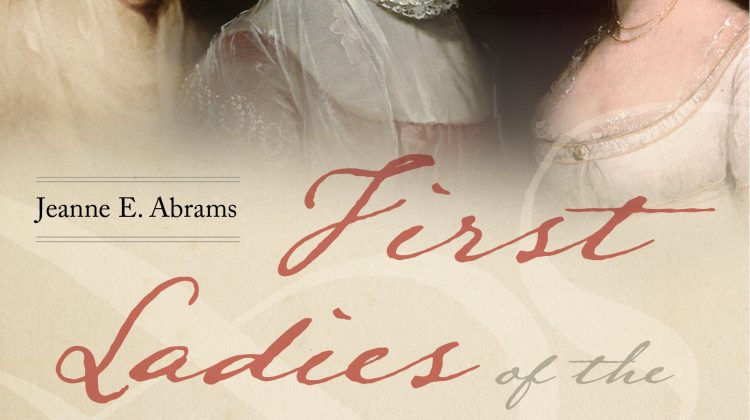 Jeanne Abrams is a Professor, University Libraries at the University of Denver. This interview is based on her new book, First Ladies of the Republic: Martha Washington, Abigail Adams, Dolley Madison, and the Creation of an Iconic American Role (NYU Press, 2018).

JF: What led you to write First Ladies of the Republic?

JA: It was actually my last book, Revolutionary Medicine: The Founding Fathers and Mothers in Sickness and in Health, which sparked my interest in the way our inaugural first three ladies carved out a role for themselves in the political life of the early American republic. Revolutionary Medicine examined the lives of George and Martha Washington, Benjamin Franklin, John and Abigail Adams, Thomas Jefferson, and James and Dolley Madison from the perspective of sickness, health, and medicine in their era. In the process of writing that book I gained a deeper appreciation for the role these formidable and path-breaking women, Martha Washington, Abigail Adams, and Dolley Madison, played in the grand experiment which transformed America from a colonial outpost to an independent nation.

JF: What is the argument of First Ladies of the Republic?

JA: Martha Washington, Abigail Adams, and Dolley Madison, the three “first” First Ladies of the United States, invented the position without a roadmap to follow to accommodate the demands of a new republican government. Although they had to walk a fine line between bringing dignity to the position and distancing themselves from the courtly styles of European royalty that were seen as inimical to the values of a republic, these three spirited women, who in their time could not even vote or hold office, exercised intelligence and initiative to play a substantial role in the nation’s early political life.

JF: Why do we need to read First Ladies of the Republic?

JA: First Ladies of the Republic demonstrates that the creation of the United States was not only a male enterprise. Although they were constrained by the customs of their era, elite women like the inaugural First Ladies played a substantial role in the nation’s early political life. All three helped shape the nation’s political culture and were able to transcend boundaries between the private and public sphere. The lives of these three extraordinary women intersected on many occasions, and they learned from one another as the brand new position of First Lady evolved. Moreover, though most historians have looked at male and female socio-political roles in their era as a binary divide, I argue that it is more useful to view the manner in which they operated together with their presidential husbands as members of a family unit. For early members of America’s governing elite, political life was often a joint cooperative undertaking, an effort in which they participated actively as part of a close-knit family circle. The three First Ladies were all deeply committed to the public good and the principles of independence and liberty which had first emerged in Revolutionary America and continued to develop in the early national period, but at the same time, they also worked to burnish the public images of their presidential spouses and advance their family interests.

JA: As a freshman in college many decades ago, I had to write a paper on American Loyalists in the American Revolution for a history class. I paid a visit to the New York Historical Society, and too my astonishment and gratitude, I was handed a box of letters written by Loyalists in the 1760s and 1770s. I couldn’t believe I was holding historical documents from two centuries prior in my hands, and the experience launched my on the road to becoming an historian. That fateful day, I immediately fell in love with primary sources, and it is a love affair that has endured to this day.

JA: I am now working on a book manuscript about the European journeys of John and Abigail Adams and how their time abroad influenced their increasing admiration for their home country of America and commitment to the republic of the United States.