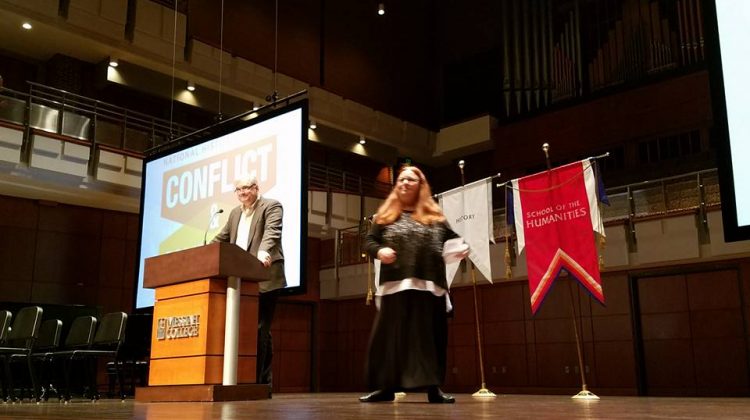 I’ve been a haphazard tweeter but some thanks from #SEAStLouis2018! @SpencerWMcBride @BenjaminEPark continue to be the best conference friends. Great lunch organizers along with @brfranklin4. @econroykrutz let me tag along for ice cream. And I saw @JohnFea1 for one second.

Wait – you actually *saw* @JohnFea1? I’m told I have to accept on faith that he was there, but I’m skeptical. I had a terrific time hanging out with you as well 🙂

I blinked and he was gone. I suppose it could have been an illusion. Or a sign from God that he approved of my work.

Yes–there was a conference in Saint Louis this weekend.  And yes, I was there.

I arrived early on Thursday morning (the first day of the conference) and got hit with food poisoning that kept me in my hotel room most of the day.  My plan was to attend sessions and catch-up with friends and colleagues on Thursday, give a paper on religious disestablishment in New Jersey on Friday morning, and chair another session on Friday at 2:30.  I was scheduled to fly out of St. Louis in the early evening on Friday and get back to Pennsylvania late Friday night so I could help preside over the PA District 8 National History Day competition at Messiah College on Saturday.

Then the Nor’easter hit the East Coast.

My Friday night flight was cancelled and American Airlines could not book me on another flight that would get me back to Harrisburg in time for History Day.  In the end, I gave my 9:00am presentation on New Jersey, caught a taxi to the airport where I rented a car, and made the 12-hour drive back to Pennsylvania.  It was the only way.  (I did shell-out the $6.00 for Sirius/XM radio so I had company on the drive).

I am listening to @JohnFea1 speak about religious disestablishment and religious freedom in New Jersey at the onset of the American Revolution.#SEAStLouis2018 pic.twitter.com/gmMqXkvljQ

I got home around 2am, caught a few hours of sleep, and was at Messiah College by 8am.

I was only able to do this because my friend Jonathan Den Hartog agreed to take my 2:30pm chair duties in St. Louis on Friday.  Thanks again, Jonathan!

And speaking of Jonathan, check out his post on the conference at Religion in American History blog.  Here is a taste:

On a related note, the conference was successful in bringing together both historians and literary scholars. Although disciplinary differences were on display–in one panel: unpacking one sermon vs. treating a long genealogy of ideas vs. considering both physical and written evidence–still good efforts were made to talk across borders and gain greater insights.  Further, presenters showed how different methodologies could illuminate a shared topic.

These two pieces–the critical mass and the conversation across disciplines–point to the energy in the field. These conversations are not only important in 2018, but they point to questions of enduring concern. Those digging into the topic are making great contributions, and I expect we will continue to see great results growing from this conference into the future.