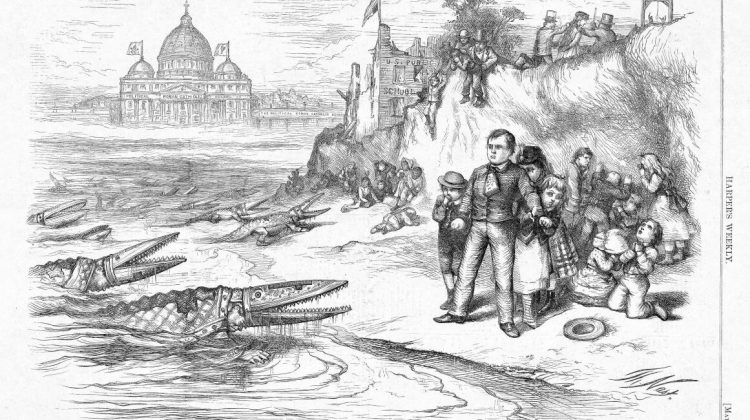 Catholic University historian Julia G. Young believes that it does.  Here is a taste of her piece “‘We Were Different‘”:

A few years ago, I taught an undergraduate course on migration at the Catholic University of America. During one lecture, I compared nineteenth-century Italian migration and contemporary Mexican migration to the United States. A hand shot up, and a student—one of several with an Italian surname—objected. “They’re not the same,” he protested. “My great-grandmother came here legally, and learned English—Mexicans don’t do that.”

As a historian who studies Mexican immigration to the United States, I’m used to hearing statements like this. Concerns about new immigrants’ legal status and failure to assimilate are widespread, and nativism has re-emerged in recent decades. Still, I wondered why this proud young Italian-American Catholic was so unwilling to compare his ancestors to the Mexican Catholic immigrants of today. Why did he not feel a sense of sympathy and solidarity for contemporary immigrants, who share so much with the great waves of Irish, Italians, Poles, and other immigrants of the late nineteenth century?

At the time, I didn’t quite grasp how many U.S. Catholics feel the widespread American discontent over immigration. After all, the Catholic hierarchy is vocally pro-immigrant, and the U.S. Catholic population is entirely composed of immigrants and descendants of immigrants. Catholics have a proud tradition of social justice, and numerous Catholic organizations have done immensely valuable work to protect immigrants. Nevertheless, in our new Trumpian era of border walls and travel bans, it has become more apparent to me (and others, such as Paul Moses in a recent piece for Commonweal, “White Catholics & Nativism,” September 1, 2017) that white Catholics have a nativism problem of their own.

Given the history of Catholic immigration to the United States, perhaps I shouldn’t have been surprised. Catholic nativism toward other Catholic immigrants is a recurring sentiment that dates to at least the second half of the nineteenth century, when the influx of Catholics changed the religious landscape of the United States. From then until today, Irish, Italian, Polish, Mexican, and other Catholics have fought over power, identity, religious practice, and shared spaces.

Read the entire piece at Commonweal.