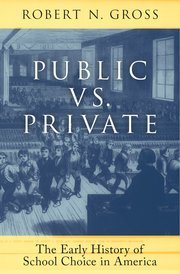 Robert Gross is a United States History Teacher and Assistant Academic Dean at Sidwell Friends School. This interview is based on his new book Public v. Private: The Early History of School Choice in America (Oxford University Press, 2018).

JF: What led you to write Public v. Private?

RG: I have always been deeply invested in educational policy debates about school choice, charter schools, and private schools. As a historian I wanted to look to the past to understand the origins of what I consider to be modern school choice and what we can learn from that history. I ultimately found that this was a 19th- and early 20th-century story, when public systems arose to eliminate the private, market-based schools that had existed earlier, and when Catholic school systems then emerged to challenge public schooling. It was in this period that, after significant conflict, Americans agreed to the existence of systematic alternatives to public schooling. Understanding how that happened, what it tells us about broader American legal ideas about public and private, and what it might mean to the present is what I wanted to write about.

JF: In 2 sentences, what is the argument of Public v. Private?

RG: That we owe the existence of school choice in the United States much less to market forces than to public regulation—Americans have consented to private schools precisely because states have regulated them substantially, and, in return, given them significant public subsidies. I also argue that broader American legal battles over the scope of public power over private enterprise have been centered on, and determined by, state regulation of private schools.

JF: Why do we need to read Public v. Private?

RG: As I indicate above, American historians have missed the central role that private schools have played as sites of contestations over the extent to which states can regulate private enterprise. I don’t think we can understand just how powerful state regulation has been in this country without looking at schools, and private schools in particular. Secondly, this story has important lessons for our contemporary discussions over charter schools, voucher programs, and school choice more broadly. Too often we frame our debates about school choice over whether one is “pro” or “anti” charter schools, to cite the most prominent example. Public vs. Private argues that the more important question, perhaps, is how we will regulate school choice. What should be the standards for a school to receive a charter today? How should we hold these schools accountable? What do we collectively owe parents to help them navigate educational markets? These kinds of questions became essential to working out the relationship between public and private schools in the late nineteenth and early twentieth century, and we would do well to return to them.

RG: I suppose I’ve always been searching for the answer to the question that David Byrne of the Talking Heads posed: “How did I get here”? I think my particular path to becoming primarily a historian of American education emerged from my own schooling. I’ve always sought to know why our schools look the way we do, why private schools exist, and how Americans have thought about education in the past.

RG: Nothing is imminent at the moment. I currently live in DC and am fascinated by the history of the city and what it tells us about so many important areas of American life, from race to urban planning to the role of the federal government.