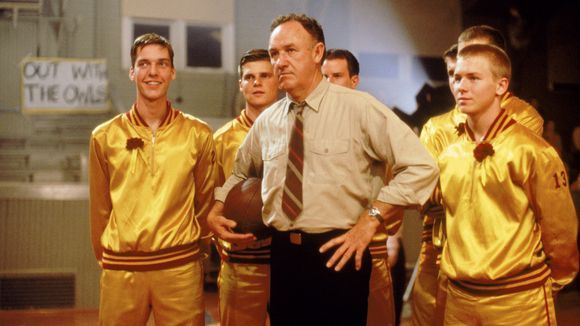 I have been enjoying Ben Railton‘s series on sports movies at his American Studies blog:

“The Fighter and Silver Linings Playbook”

Here is a taste of “Hoosiers and Rudy”:

It’d be hard to decide which of those inspired-by-a-true-story underdog victories is more unlikely and more inspiring. The Hickory high school team in Hoosiers (based loosely on Milan High’s 1954 championship season) is coached by two men as collectively flawed as Buttermaker in Bad News Bears—Gene Hackman’s Norman Dale has been dismissed from his prior job for losing his temper and striking a student; Dennis Hopper’s Shooter Flatch is an alcoholic town outcast—and has barely enough players to field a team, yet goes on to win the state championship against a vastly more deep and talented South Bend team. Daniel “Rudy” Ruettiger, whose life and events are portrayed relatively close to accurately by Sean Astin and company, is the undersized son of an Illinois factory worker who refuses to give up on his dream of playing football for Notre Dame, overcoming numerous challenges and obstacles and finally making his way onto the team and into the final game of the season, in which he sacks the quarterback on the final play and is carried off the field by his teammates. Having critiqued lovable loser films for their merely pyrrhic victories, it’d be hypocritical of me not to applaud films that depict underdog victories, and such stories are indeed undeniably appealing and affecting.

Yet in order to tell their stories in the way they want, these films also have to leave out a great deal, elisions that are exemplified by the way racial issues are not addressed in Hoosiers. For one thing, Hickory’s opponent in the championship game, South Bend, is intimidating in large part because it features a racially integrated team, which would have been a significant rarity in 1952 and which would seem to make them a team worth our support. And for another, as James Loewen has written in his groundbreaking book Sundown Towns (2005), southern Indiana in the early 1950s was a hotbed of overt and violent racism; to quote Loewen, “As one Indiana resident relates, ‘All southern Hoosiers laughed at the movie called Hoosiers because the movie depicts blacks playing basketball and sitting in the stands at games in Jasper. We all agreed no blacks were permitted until probably the ’60s and do not feel welcome today.’ A cheerleader for a predominantly white, but interracial Evansville high school, tells of having rocks thrown at their school bus as they sped out of Jasper after a basketball game in about 1975, more than 20 years after the events depicted so inaccurately in Hoosiers.” Such histories don’t necessarily contrast with those featured in these films—but it would be important to complement the films with fuller engagement with their perhaps less triumphant contexts.

If you are a sports fan or just enjoy sports movies, these posts are worth your time.