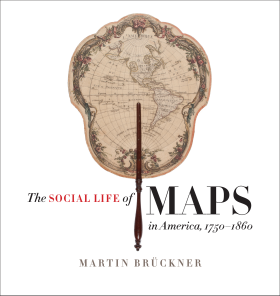 Martin Brückner is professor of English and Material Culture Studies at the University of Delaware. This interview is based on his new book, The Social Life of Maps in America, 1750-1860 (Omohundro Institute and University of North Carolina Press, 2017).

JF: What led you to write The Social Life of Maps?

MB: This book had its beginnings in a map encounter and the slow realization that maps played a wonderfully complex role in the lives of early Americans. My map encounter was seeing Henry Popple’s luxuriously crafted A Map of the British and French Empire in America (1733) fully assembled and on display in Colonial Williamsburg. Designed as a wall map, the map measured a whopping six by six feet. It was not only the physically largest map showing the colonies during the long eighteenth century, but it managed to impress someone like John Adams, who, upon seeing it in Independence Hall in 1776, wrote to his wife Abigail “It is the largest I ever saw, and the most distinct. Not very accurate. It is Eight foot square!”

I found his reaction to be curious because it pointed to what I thought was an uncharacteristic response for an Enlightenment-trained actor like Adams: why would the Pennsylvania Assembly hang up a super-sized and costly map that would simultaneously broadcast its very inadequacy as a map? My curiosity grew when I realized that despite the fact that the Popple map was soundly rejected by the British scientific community, it nevertheless was prominently staged in colonial state houses and by private citizens like Benjamin Franklin. Contrary to my expectation, map accuracy was not all that mattered to early Americans. Instead, they engaged with maps using multiple and often contradictory frames of reference, from way-finding tool to theatrical spectacle and from empirical evidence to sentimental possession. Inspired by the diversity of map uses, I set out to track the social lives (or call it careers) of both singular maps like the Popple map and generic commercial maps by asking the twofold question: How were large and small maps embedded—real and symbolically—in American public and private life? And what did American-made maps do—really do—for Americans?

JF: In 2 sentences, what is the argument of The Social Life of Maps?

MB: This book’s argument, broadly speaking, is that American-made maps emerged as a meaningful media platform and popular print genre during the mid-eighteenth century precisely because the map as artifact and the concept of mapping had become involved in social relationships between people. On the one hand, the argument emphasizes that cartographic literacy was anything but a common competence; reading the squiggly lines of topographical maps, following map coordinates, in short, thinking cartographically was not only a skill and habit that had to be learned and practiced, but which in the process generated many applications and odd turns as American citizens took to maps as a major mode of social communication. On the other hand, because most maps were commercial maps and were thus considered by map-makers and map-users as saleable goods, much of their value—be it informational, symbolic, or affective—came emphatically alive during the social process of exchange. Examining the social life of maps in early America allows us to comprehend more fully the expressed faith in the usability of maps as a popular tool a large number of people embraced in order to shape their lives as individuals, citizens, or members of communities like the family or the nation.

JF: Why do we need to read The Social Life of Maps?

MB: You should read this book because I believe it will change the way you think about how maps work in American history and culture! Far too long have we undervalued, even misunderstood, the significance of maps by only considering maps as either empirical evidence of geographical knowledge or as rhetorical representation of political power. But if you read this book, you will discover that Americans had access to a vast array of commercial and home-made maps. These maps were not only best-sellers and available to a highly diverse audience, but they were prominent participants, even agents of change, in the new nation’s changing cultural landscape. From map giants imitating the size of the Popple map to flashy handkerchief maps, from cheap pocket maps to elaborately drawn and embroidered school maps, American-made maps helped shape the public sphere and new business models; they were prominent display objects in people’s homes; they were cherished as gifts and heirlooms; they were essential to the curricula of the nation’s educational systems; and above all, because they were widely available as visual and decorative objects, the very look of American maps defined the way in which people looked at pictures and their personal surroundings, be it indoors and outdoors. After reading this book, you will think about historical maps in new and different ways.

MB: I came to American history gradually and by following a circuitous path. As a student and teacher of early American literature, I always felt that it was my second job to always historicize the words and images I found in sermons and poems, plays and novels. But from the moment that I discovered that maps played a crucial role in early American literature, I became fascinated by the history of cartography, especially the “new history” of cartography and its attending focus on the production of maps, the role of industrial print culture, the social history of consumption, not to mention historical archives including wills, inventories, and sales records. While I now read maps through the lenses of being a textual historian, material culture specialist, and a map historian, my take on American history is deeply informed by the fact that I am an immigrant and that therefore I constantly look at American history and the maps that represent it in order to better understand my new home when thinking, for example, about its roads that are set up in grid patterns, its fascination with landed property and neighborhoods, or the way in which its public media opts to represent data as different as the weather or election results.

MB: I am currently working on three interrelated projects, all of which explore the relationship between American literature, material culture, and the history of capitalism. I am currently co-editing a volume investigating the phenomenon of fugitive archives; the contributors examine the facts and fictions surrounding the loss and recovery of archives or archived objects, including their structures, uses, and the challenge they pose for the curation of personal and communal experience. My second project is a digital database called “ThingStor” and is conceived to become a material culture database for finding and cross-referencing material objects cited in American literature and the visual arts. You can view its prototype (and actively contribute to it) at www.materialculture.udel.edu. Finally, my next research project examines the cultural history of “literary things” and the American tradition of object narratives; this book project explores in particular the transfer of popular fiction into material forms and the way in which these were packaged and sold in an emergent marketplace rife with mass-marketing, cross-over products, and the vertical integration of cultural forms.