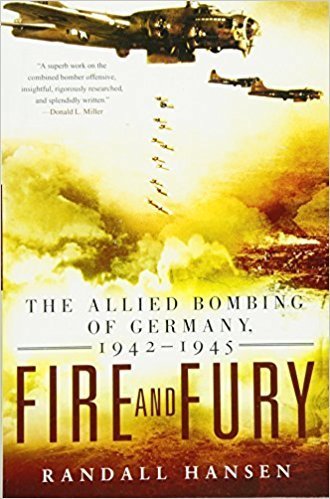 Michael Wolff’s Fire and Fury: Inside the Trump White House is currently ranked #1 at Amazon.  But this post is not about that book.

According to The Huffington Post, a Canadian historian‘s book on World War II–Fire and Fury: The Allied Bombing of Germany, 1942-1945–also seems to be doing quite well these days.  His name is Randall Hansen and he directs the Munk School of Global Affairs at the University of Toronto.

Here is a taste of Liam Casey’s report at The Huffington Post:

“The book is 10 years out and it had been languishing for years and suddenly it was on three bestseller lists,” Hansen said.

Wolff’s book about Trump was the only logical reason for the sales bump, he thought. So he shared that thought with his Twitter followers and went to bed. When he woke up, the tweet had been shared more than 1,000 times and in came interview requests from international media.

He said he won’t know how many people ordered his book by mistake until his royalty cheque arrives in about a month’s time. But he only had a few people complain to him on Twitter that they meant to buy Wolff’s book instead.

“It’s not my fault people can’t tell the difference between a book about Trump and a book about the bombing of Germany,” Hansen said. “But most have been jovial and appreciated the moment of levity.”