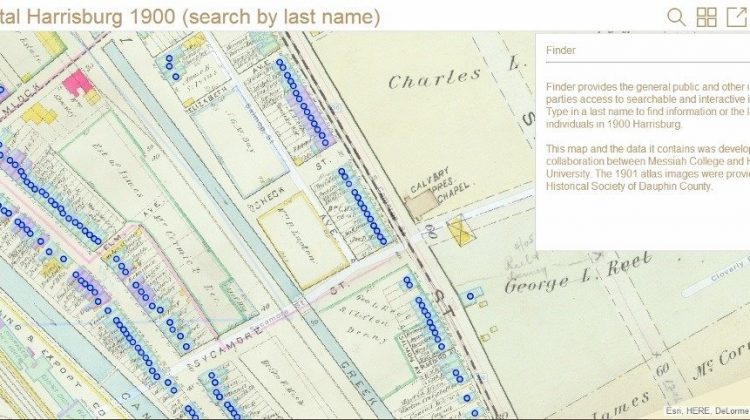 I just finished chairing a session at the annual meeting of the American Historical Association titled “Placing the American Community: Lessons from the Digital Harrisburg Project.”

Here is the session abstract:

In spring 2014, students and faculty from Messiah College and Harrisburg University of Science and Technology initiated a collaborative digital project to place the entire population of Harrisburg, Pennsylvania, and the neighboring (historically) immigrant town of Steelton, on contemporary historical maps from the early twentieth century. Through class exercises and projects, work study positions, and volunteer efforts, history professors and students input the entire population of these communities from the decennial censuses of 1900-1930, including all relevant census fields such as race and birthplace, immigrant status, occupation and industry. At the same time, and in conjunction with this work, GIS students and faculty at both institutions digitized contemporary maps of Harrisburg and Steelton. The result of this combined labor is a massive demographic database of over 300,000 names, linked to over 10,000 individual residences in a GIS. Teams have also begun to incorporate (via a unique property number) other large data sets such as church membership rolls, names and occupations from city directories, and property values for the same time span. And history faculty have mined newspaper databases and recorded oral histories to fill out the picture of the city.

The Digital Harrisburg Project has been a boon to our institutions, giving our history students new digital proficiencies in databases and GIS, and our GIS and computer science students an opportunity to tackle historical problems, while also creating real and enduring collaborations across departments and institutions. As importantly, the project has generated a new and powerful historical resource for understanding and rethinking major phenomena in U.S. urban history. The integration of multiple sets of information encoded at individual street addresses in GIS has created one of the highest-resolution digital images of an early twentieth century urban community transformed by immigration, population growth, and city planning. Plotting the population through time (1900-1930) sheds light on the dynamic patterns of human mobility and migration that were characteristic of communities at the junction of major roads, waterways, and rail lines. The datasets also have allowed us to reconsider the demographic, racial, and spatial aspects of Harrisburg’s successful urban reform movement, outlined most clearly in William Wilson’s pioneering work on The City Beautiful Movement (1989).

In this session, we provide an overview of the history of the Digital Project within our institutional contexts; outline the nature of the data sets including the geospatial framework; highlight the potential of the data for reconsidering broad issues of historiographic debate; and showcase our recent efforts to replicate the data for other cities and places through new technologies (computer vision). The goal of this session is to publicize the results of the project in anticipation of the imminent public dissemination of the demographic and geospatial datasets for purposes of research, and to highlight how others might engage in a similar project within their own communities. We also hope attendees will provide us feedback as we consider next steps.

Speakers focused on 3 aspects of the Digital Harrisburg Initiative:

The audience–a combination of digital historians and Pennsylvania history experts–was small.  But they were also very engaged.  Commentator Lisa Boehm praised our work, told us to be “less humble” about it, and offered some great suggestions for moving forward.

Click here to learn more about the Digital Harrisburg Initiative.